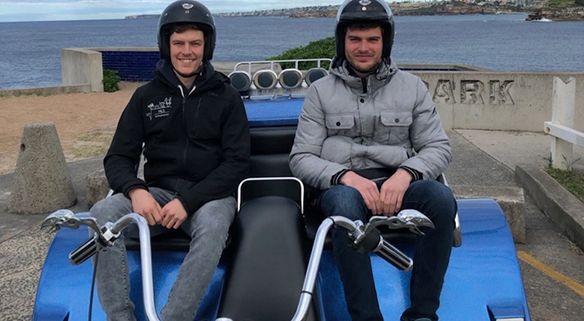 Our passengers from Germany, decided to do an Australian holiday trike tour. While in Sydney they thought it the best place to experience the freedom on a trike and see the sights. We agree, it is the best place! So many beautiful areas to explore.

Our trike rider Brian, picked them up from their accommodation in the Sydney CBD.

Next, they rode through the inner eastern suburb of Woolloomoolloo and past the famous Harry Cafe De Wheels. Harry’s Café de Wheels has been serving customers for over 80 years. They make delicious pies, hotdogs and more.

Continuing on, they rode through the infamous Kings Cross, though it has calmed down a lot since it’s heyday – home of the famous and huge Coca Cola sign. Kings Cross is also home to nightclubs and ladies of the night though it is not nearly as raunchy as it was in the 1970s (apparently). After there, they headed east through the posh suburbs of the eastern suburbs of Sydney, including the Bays: Rose Bay, Double Bay and Rushcutters Bay.

There are a couple of lookouts at the North Bondi headland. They all offer beautiful views of Bondi Beach and out to the Tasman Sea, part of the South Pacific Ocean. Brian stopped there for a few photos and so they could admire the view. So far, on the Australian holiday trike tour they have seen some great views and scenic sights.

Next, they drove past the world famous Bondi Beach to the south side. Looking from the two ends of the beach give a different perspective. This is the beach where Bondi Lifeguards of the Bondi Rescue TV series is filmed. When in Sydney it is one of the places you should visit. The beach is seriously nice (but not our favourite) and we usually stop near the lifeguard station, made famous by the TV series “Bondi Rescue”. Bondi Beach is one of the most visited tourist sites in Australia. Bondi Beach is recorded by the Australian Museum that Bondi means place where a fight using boondi sticks (nullas nullas or fighting sticks) took place.

Riding further south, along more beautiful, though possibly less well known, beaches. The suburb of Tamarama has a small ocean beach about 1 kilometre south of Bondi Beach and a couple of hundred metres north of Bronte Beach. It is an extremely narrow beach and deceptive for its size. Tamarama Beach is often referred to as Glamarama (or Glamourama), owing to the alleged abundance of glamorous people who sunbathe (often topless), on what must be one of the smallest strips of sand in the state (Wikipedia). So far, the trike tour for surprise birthday is a huge success.

Bronte Beach sits on Nelson Bay, surrounded by Bronte Park. Bronte offers scenic cliff-top walking paths south to Coogee via the Waverley Cemetery and north to Tamarama and Bondi Beach. Clovelly Beach is a small and tranquil beach located at the end of a narrow bay. All these beaches are beautiful and great places to swim.

Next is Coogee Beach where they stopped for a coffee and a stretch. Another beautiful beach and slightly more famous than the previous beaches, due to a well know hotel in Coogee. The name Coogee is said to be taken from a local Aboriginal word koojah which means “smelly place”. Another version is koo-chai or koo-jah, both of which mean “the smell of the seaweed drying” in the Bidigal language, or “stinking seaweed”, a reference to the smell of decaying kelp washed up on the beach. Coogee was gazetted as a village in 1838. The first school was built in 1863, and the building was converted into the Coogee Bay Hotel in 1873 (Wikipedia).

Riding past Coogee Beach to Rosslyn Flats is interesting. However, the 1.5 hours was almost up, so Brian headed north west, through Randwick and Moore Park before dropping them off in the city. Here they could continue exploring our beautiful city.

In conclusion, the Australian holiday trike tour was one of the best things they have done on their holiday. We love making people happy!