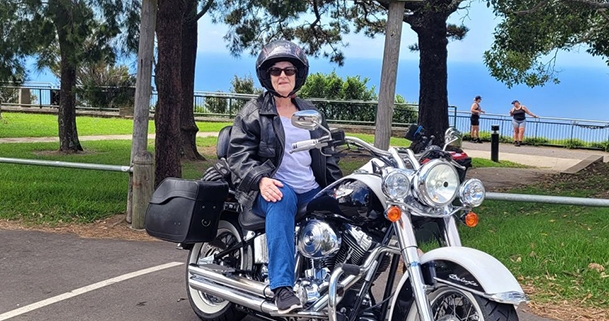 The special birthday Harley tour was a surprise. Sue has just retired and was celebrating an important birthday today. Her friends organised it for her, telling her to wear long pants and covered shoes as they were going bush walking. 😆 You can imagine Sue’s surprise when the Harley turned up. She used to ride on the back of a Harley Davidson so it was a ride down memory lane.

Our Harley rider David, picked Sue up from her daughter’s place in Bonnet Bay. Firstly, they travelled to and through the Royal National Park. A quick photo stop at Audley, downstream from the weir. Completed in 1883, the weir served two important purposes. It provided access to the other side of the river, and it created a permanent body of freshwater which could be stocked with fish and also used for boating and bathing. David and Sue returned to the main road and rode the complete length of the Royal National Park. It was established in 1879 and spans 160 square kilometres. As Australia’s first National Park and after Yellowstone in the U.S.A. it was the second National Park in the world to be established.

Next, they stopped at Bald Hill with its wonderful views. Not only are the views excellent, the area is also internationally known as a major hang-gliding point. On the beach below Bald Hill, Lawrence Hargrave, an Australian pioneer of flight, made a successful flight on 12 November 1894.

Here David shouted Sue a coffee to celebrate her birthday. It couldn’t be alcoholic because they were riding. After that, they road south across the wonderful Sea Cliff Bridge. One of the main attractions of this tour and of the area, is the Sea Cliff Bridge. The road used to have some scary moments. The potential of falling debris or subsidence into the sea made it necessary to close the road, but all is well again. The impressive 665 metre Sea Cliff Bridge is now in operation, snaking its way around the cliffs and over the water, offering a far safer but spectacular route. So far, the special birthday Harley tour was so much fun!

And then it was down to the base of Bulli Pass. The Harley easily climbed Bulli pass and at the top, they travelled a bit further north to Sublime Point Lookout. Bulli Pass is a mountain pass with an elevation of 283 metres (928 ft). It is situated on the Illawarra escarpment west of the Illawarra coastal plain. It was built during the 19th century for use by loggers and locals transporting goods to and from Sydney. Beforehand, sea travel was the only reliable method. Sublime Point Lookout offers 180 degree views over the sea, the rainforest and the 17 beaches that span the coastline to Wollongong.

However, by this time the 2 hours was almost up. David rode Sue back to her daughter’s place and dropped her off. In conclusion, the special birthday Harley tour was a huge success. A fabulous and memorable birthday present.