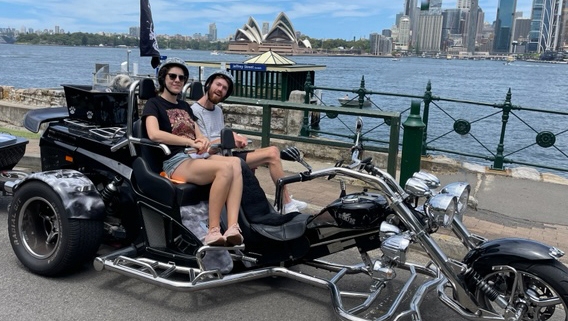 The disability passenger trike tour was for Nick. He does a tour with us a few times a year and loves the whole feeling of freedom. Each time he chooses somewhere a little different so today was the 3 Bridges ride plus a bit of the city.

Our trike rider Scott, picked Nick and his carer up from the usual place at Kirribilli Wharf.

From here, the views across Sydney Harbour towards the Sydney Opera House and the CBD are magnificent. In addition, it also has an up-close view of the side and underneath of the bridge. A perfect place to take photos.

They continued riding on through North Sydney and Crows Nest before joining River Road. It is a fun road to ride on. River Road leads to Burns Bay Road which, in turn, leads to another bridge but not one of the main three. So far, the disability passenger trike tour was great fun.

The Fig Tree Bridge opened in 1963 and spans the Lane Cove River. After that bridge, they continued on and crossed the second of the bridges Tarban Creek Bridge. This spans Tarban Creek, likewise, it has nice views east to the Harbour Bridge. Then they got to bridge #3 of the main 3 Bridges, the Gladesville Bridge. It has wonderful views along Parramatta River towards the Harbour Bridge and the city.

Next, they rode over our favourite bridge, the ANZAC Bridge. We think it is incredible, a work of art and design. Similarly, it is also great to see without a roof over your head inhibiting the view.

However, the 1.5 hours was nearly up so Scott rode them over the famous coathanger. It is the famous Sydney Harbour Bridge. As they rode over it, we always tell our passengers to look up and enjoy the unique view. The more than 6,000,000 rivets are so interesting and the arch is so iconic.

Drop off was back at their van at Kirribilli. In conclusion, Nick once again loved the disability passenger trike tour as did Rachael. We are looking forward to taking Nick again in a few months.