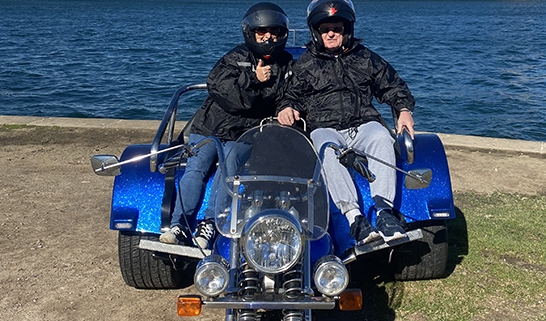 89 years young! The Christmas gift vouchers tour was bought by Christine for her Dad. As Christine said to him “Life should always be an adventure”. The time was right to do the tour. Geoff came down from the Central Coast and went to Christine’s home in the inner west of Sydney. Our trike rider Steve, picked them up and took them on a 2 hour tour around Sydney.

“Booked a 2 hour Harley ride as a gift for my dad, it was SO much fun and I couldn’t stop smiling. Steve made us feel totally safe and comfortable. My dad especially enjoyed seeing views of Sydney and Bondi that he hadn’t seen in years. I would absolutely recommend Troll Tours. What an awesome way to see the sights of Sydney! Special shout out to Katrina for making the booking process such a breeze. Thanks Troll Tours!
Christine”

Firstly, they did the Harbour Bridge tour. They rode over the Sydney Harbour Bridge. We always tell our passengers to look up and enjoy the unique view. The more than 6,000,000 rivets are so interesting and the arch is so iconic.

After a stop for a stretch and a few photos, they hopped back on the trike and rode to Kirribilli.

Next, they rode past Kirribilli House. Kirribilli House is the secondary official residence of the Prime Minister of Australia. After that, they rode around the corner to Jeffrey Street Wharf. From here, the views across Sydney Harbour towards the Sydney Opera House and the CBD are magnificent. In addition, it also has an up-close view of the side and underneath of the bridge. A perfect place to stop for photos.

They rode under the north side of the bridge and continued on their tour. The underside of the northern end of the SHB – Sydney Harbour Bridge – is very interesting. The Kirribilli Loop was finished by riding past Luna Park and the North Sydney Olympic Pool. So far, the Christmas gift vouchers tour is the best present ever!

Riding through the lovely Centennial Park is interesting. 120 fields and venues, and 35+ different sports played, Centennial Parklands is the largest community sports precinct in Australia! The history is also interesting: “Originally a swamp and then set aside as land for the water source for Sydney, Centennial Park was reconstructed as a public park and opened in 1888. Sir Henry Parkes’ vision was to create a ‘People’s Park’ in which the citizens of Sydney could ‘take in the air’ away from the Sydney town centre.

Next, it was fun riding past the famous Bondi Beach. In this area, onlookers always seem to wave. They stopped at the famous Bondi Beach for photos, when in Sydney it is one of the places you should visit. The beach is seriously nice (but not our favourite) and we usually stop near the lifeguard station, made famous by the TV series “Bondi Rescue”. Bondi Beach is one of the most visited tourist sites in Australia. Bondi Beach is recorded by the Australian Museum that Bondi means place where a fight using boondi sticks (nullas nullas or fighting sticks) took place.

The Gap, near Watsons Bay

Heading north, they rode through some of the eastern suburbs before stopping at the Gap, near Watsons Bay. Here, they stopped at “The Gap” for photos. The view towards North Head and out to the South Pacific Ocean. Watsons Bay sits on the end of the South Head peninsula. However, the 2 hours was almost up. So they drove to the drop off via the posh eastern suburbs of Vaucluse, Rose Bay, Double Bay and the ANZAC Bridge.

Our favourite bridge is the ANZAC Bridge. We think it is incredible, a work of art and design. Same as the Sydney Harbour Bridge, it is also great to see without a metal roof over your head inhibiting the view.

Most noteworthy, the stay cable design concept development and final design for the new bridge were carried out by the Roads & Traffic Authority of NSW. Finally, the bridge was opened to traffic on 03 December 1995 as the Glebe Island Bridge. The bridge was given its current name on Remembrance Day in 1998 to honour the memory of the soldiers of the Australian and New Zealand Army Corps (known as Anzacs) who served in World War I.

Steve dropped the passengers back at home in Balmain. In conclusion, the Christmas gift vouchers tour was a huge success. Gift Vouchers are great because they are valid 3 years. There is plenty of time to pick a date which everyone can do.
https://trolltours.com.au/product/design-your-own-ride/