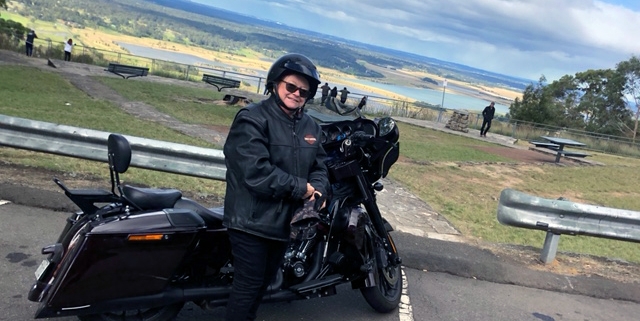 Jeanette has always wanted to go on a Harley. So she booked the lower Blue Mountains Harley tour with us. To say she was excited was an understatement! On the phone and in her emails, she was raring to go. Living out of Sydney, she came down to her brother’s place in Springwood. Our Harley rider Rob, met her there and took her on the 2 hour lower Blue Mountains Harley tour.

Firstly, they rode down Springwood Rd to the Hawkesbury Lookout. It has wonderful views out over the Nepean River and across the Cumberland Plain. Next, they rode through Agnes Banks. It is part of the Greater Western Sydney region. According to Wikipedial “Natural woodlands and sandy deposits make up the higher landscape of this suburb. Agnes Banks is a rural outpost of the City of Penrith which has kept its intrinsic agricultural value and rural lifestyle.”

From there they wanted to ride a bit ‘harder’, so they rode up the Great Western Highway to Hazelbrook. Here they had a stop to stretch their legs. The town was named after Hazelbrook House, built in the 1870s by Svonte Noles. The name Hazelbrook was adopted in 1894 when the Hazelbrook railway station was opened opposite the home. Hazelbrook House no longer exists

However the 2 hours was nearly up, so Rob rode back to Springwood and drop off. In conclusion, the lower Blue Mountains Harley tour was fabulous. It was everything Jeanette had hoped for and more.

A fun fact: A blue haze blankets the region when viewed from a distance, hence the name Blue Mountains. Forests of eucalyptus and gum trees grow in the area. The Eucalyptus oil droplets emitted from the forests, combine with dust particles and water vapour, scattering short wavelength rays of light which are predominantly blue in colour.