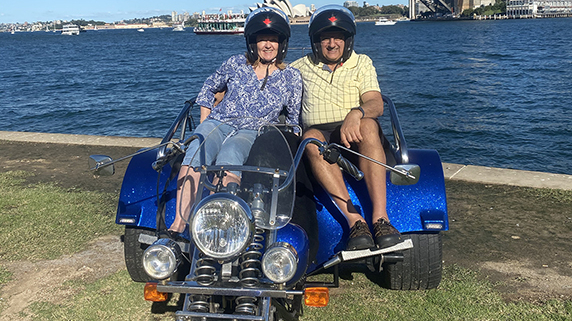 Janet organised the surprise 3bridges trike tour for her husband. She went with him to share the experience. We arranged our trike rider Steve to pick them up. Originally we organised to meet them outside a restaurant in College St, in the city. However, there was a Black Lives Matter protest happening on College St. So after a few quick phone calls, Steve and our passengers met up in a different spot.

Firstly, they rode over the Sydney Harbour Bridge. We always tell our passengers to look up and enjoy the unique view. The more than 6,000,000 rivets are so interesting and the arch is so iconic.

After a stop for a stretch and a few photos, they hopped back on the trike and continued riding on through North Sydney and Crows Nest before joining River Road. It is a fun road to ride on. River Road leads to Burns Bay Road which, in turn, leads to another bridge but not one of the main three.

The Fig Tree Bridge opened in 1963 and spans the Lane Cove River. After that bridge, they continued on and crossed the second of the bridges Tarban Creek Bridge. This spans Tarban Creek, likewise, it has nice views east to the Harbour Bridge. Then they got to bridge #2 of the main 3 Bridges, the Gladesville Bridge. It has wonderful views along Parramatta River towards the Harbour Bridge and the city.

This bridge is on the main arterial thoroughfare of Victoria Road. They travelled along for a short while before turning off into the inner west suburb of Drummoyne. Following the shoreline of Iron Cove, which is part of the Parramatta River, they saw some lovely water views. It is part of the 7 km long Bay Run. So far, the surprise 3bridges trike tour was a huge success.

Our favourite bridge is the ANZAC Bridge. We think it is incredible, a work of art and design. It is main bridge #3. Similarly, it is also great to see without a roof over your head inhibiting the view.

However, the hour was up so Steve dropped our passengers back at Circular Quay. The passengers thought the surprise 3bridges trike tour was fantastic. A fabulous birthday present they could share and a great way to see parts of the city only the locals know about. https://trolltours.com.au/product/three-bridges-trike-tour/