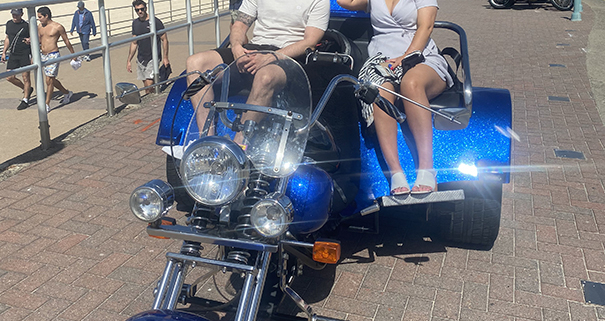 Lara organised a holiday trike tour surprise. They are in Sydney for a holiday. She thought it would be a great experience to explore Sydney with us. It is a great way to see places tourists/visitors to our wonderful city don’t usually see. If we do say so ourselves. 😎

Our trike rider Steve picked them up from a hotel at Circular Quay.

Continuing on, they rode through the inner eastern suburb of Woolloomoolloo and past the famous Harry Cafe De Wheels. Harry’s Café de Wheels has been serving customers for over 80 years. They make delicious pies, hotdogs and more. Next they rode through the infamous Kings Cross, though it has calmed down a lot since it’s heyday – home of the famous and huge Coca Cola sign. Kings Cross is also home to nightclubs and ladies of the night though it is not nearly as raunchy as it was in the 1970s (apparently).

Then it was through the eastern suburbs of Sydney, including the Bays: Rose Bay, Double Bay and Rushcutters Bay. Next the riders usually stop at Bondi Beach for photos and so our passengers can have a proper look at the beach.

Next, it was fun riding past the famous Bondi Beach. In this area, onlookers always seem to wave. They stopped at the famous Bondi Beach for photos, when in Sydney it is one of the places you should visit. The beach is seriously nice (but not our favourite) and we usually stop near the lifeguard station, made famous by the TV series “Bondi Rescue”. Bondi Beach is one of the most visited tourist sites in Australia. Bondi Beach is recorded by the Australian Museum that Bondi means place where a fight using boondi sticks (nullas nullas or fighting sticks) took place. So far, and the whole way, the holiday trike tour surprise in Sydney was a huge success.

Next, they rode through the lovely Centennial Park. 120 fields and venues, and 35+ different sports played, Centennial Parklands is the largest community sports precinct in Australia! The history is also interesting: “Originally a swamp and then set aside as land for the water source for Sydney, Centennial Park was reconstructed as a public park and opened in 1888. Sir Henry Parkes’ vision was to create a ‘People’s Park’ in which the citizens of Sydney could ‘take in the air’ away from the Sydney town centre.”

However, the hour was almost up. Steve rode our passengers back to their hotel. In conclusion, the holiday trike tour surprise in Sydney was a huge success. A real surprise for Daniel, our passengers loved every second of the experience. #feelthefreedom https://trolltours.com.au/product/the-city-viewer/