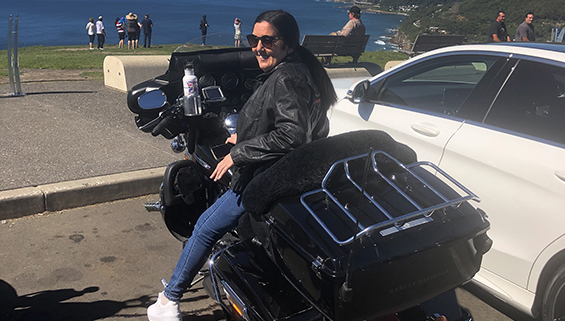 Karen really wanted to go for a ride on a Harley, so we organised the Southern Sydney Harley tour. “Yes, sure we can organise a Harley and rider for you”. She lives down near Wollongong and while we don’t have many riders down in that area, it’s not impossible.

Our rider Steve picked Karen up from her house. Firstly, they rode up the freeway to the lovely and famous Bald Hill Lookout.

Bald Hill is one of Illawarra, Australia’s most well known and most popular lookouts situated a top the hill of that name. Not only are the views excellent, the area is also internationally known as a major hanggliding point.

It was on the beach below Bald Hill that Lawrence Hargrave, an Australian pioneer of flight, made a successful flight on 12 November 1894. A memorial cairn dedicated to him has been erected at the peak of the hill near the car park.

Bald Hill overlooks the one and only Sea Cliff Bridge. The Sea Cliff Bridge extends along the Grand Pacific Drive. This is a 140 kilometre award winning coastal drive in the Royal National Park. Karen is loving the Southern Sydney Harley tour.

Then it was onto Bundeena. Some people call it paradise! Bundeena is a small, coastal suburb nestled adjacent to the Royal National Park in southern Sydney. Bordered by pristine Port Hacking waterway, stunning stretches of sandy beaches and the beautiful Royal National Park, this area truly is a nature lover’s paradise. Access to Bundeena is either by private vehicle or by ferry from Cronulla (20 minute trip in quaint timber ferry).

However, half of the 3 hours was over so they turned around and headed back. Steve dropped Karen back at home. In conclusion, the Southern Sydney Harley tour was a huge success. Karen smiled the whole way.
https://trolltours.com.au/product/design-your-own-ride/ https://www.visitnsw.com/destinations/south-coast/wollongong-and-surrounds/stanwell-park/attractions/bald-hill-lookout