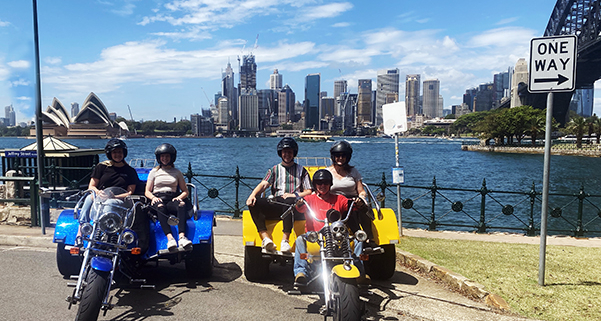 Wendy wanted to organise a “In memory of dad celebration”. “My husband passed away 2 years ago tomorrow and we have decided to celebrate him as a family every year by doing something fun together. We are really looking forward to our ride.” His wife and three kids are doing a wonderful thing, having fun keeping his memory alive. He would want that.

So, our trike riders Craig and Steve picked them up from their hotel. Even though they live in the north west of Sydney, they stay in the city for a mini holiday.

Firstly, they rode over the Sydney Harbour Bridge. We always tell our passengers to look up and enjoy the unique view. The more than 6,000,000 rivets are so interesting and the arch is so iconic.

Next, after riding across the Harbour Bridge they rode past Kirribilli House. Kirribilli House is the secondary official residence of the Prime Minister of Australia. After that, they rode around the corner to Jeffrey Street Wharf. From here, the views across Sydney Harbour towards the Sydney Opera House and the CBD are magnificent. In addition, it also has an up-close view of the side and underneath of the bridge. A perfect place to stop for photos.

They rode under the north side of the bridge and continued on their tour. The underside of the northern end of the SHB – Sydney Harbour Bridge – is very interesting. The Kirribilli Loop was finished by riding past Luna Park and the North Sydney Olympic Pool. So far, the in memory of dad celebration is a lot of fun.

They continued riding on through North Sydney and Crows Nest before joining River Road. It is a fun road to ride on. River Road leads to Burns Bay Road which, in turn, leads to another bridge but not one of the main three.

The Fig Tree Bridge opened in 1963 and spans the Lane Cove River. After that bridge, they continued on and crossed the second of the bridges Tarban Creek Bridge. This spans Tarban Creek, likewise, it has nice views east to the Harbour Bridge. Then they got to bridge #2 of the main 3 Bridges, the Gladesville Bridge. It has wonderful views along Parramatta River towards the Harbour Bridge and the city.

This bridge is on the main arterial thoroughfare of Victoria Road. They travelled along for a short while before turning off into the inner west suburb of Drummoyne. Following the shoreline of Iron Cove, which is part of the Parramatta River, they saw some lovely water views. It is part of the 7 km long Bay Run. So far, the fun 3bridges trike tour was a huge success.

Our favourite bridge is the ANZAC Bridge. We think it is incredible, a work of art and design. It is main bridge #3. Similarly, it is also great to see without a roof over your head inhibiting the view.

However, time was nearly up so Steve dropped our passengers at their drop off place. The In memory of dad celebration was just that – plenty of fun and very memorable. A wonderful way to celebrate life and memories. Feel the freedom!
https://trolltours.com.au/product/three-bridges-trike-tour/