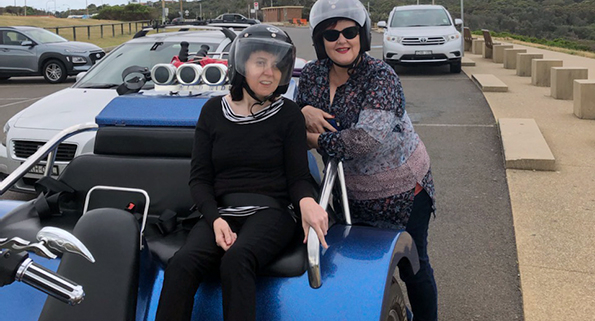 Nicky organised a surprise celebration trike transfer for her friend Denise. She wrote: “It’s my friend’s birthday in a few days and she is also nearly finished with her PhD. So I wanted to treat her (and me) to a trike ride. I have organised a little birthday dinner for her at Newtown. Denise lives with cerebral palsy and uses 2 crutches to move around.” Yes, we can tie the crutches to the trike.

Our trike rider Brian, picked our passengers up from home in Peakhurst. A southern suburb of Sydney. Firstly, they drove along side the Georges River, also known as Tucoerah River. The total length of the Georges River is around 100 km long. Next, they rode towards Brighton-Le-Sands and alongside Botany Bay. So far, the surprise celebration trike transfer is so much fun!

Then they rode around the southern perimeter of Sydney Airport. This led them to La Perouse. La Perouse is an important part of Sydney’s history. It’s where Captain Arthur Phillip’s First Fleet initially landed in 1788 before deciding on Sydney Cove. The area is named after a French explorer who missed the First Fleet by days.

However, time was nearly up so they rode through the city to the drop-off point – at a restaurant in King Street Newtown. In conclusion, the surprise celebration trike transfer was a real surprise and a huge success.

The Georges River is an urban river in southern Sydney. It flows from the headwaters on the Illawarra escarpment and Appin down to the river mouth at Botany Bay. The catchment area of the Georges River covers an area of approximately 960 km2. It’s population is approximately 1.5 million people.

The water is fresh above Liverpool Weir and is tidal and saltier below the weir down to Botany Bay. The Georges River catchment is home to almost 1.4 million people and 454 species of fauna (including aquatic and land animals). Also home to 30 riparian or riverside vegetation communities and 29 Endangered Ecological Communities.