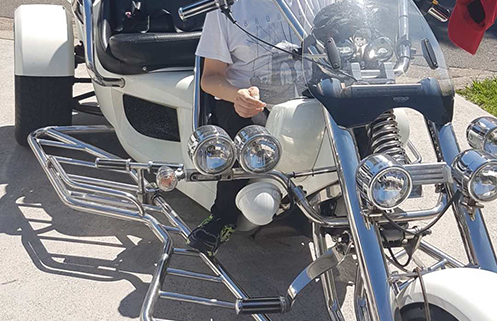 We do this trike tour for disability passenger a couple of times per year. Hugh loves it so much his carers organise it with us.

These rides are great for people with a disability. For instance, feeling the breeze, hearing the motor and just feeling the whole experiencing is wonderful for them. David picked Hugh and his carer up from their home in the southern suburbs of Sydney.

In addition, they rode to Cronulla Beach. It’s a lovely ride along the coastline. Cronulla has numerous surf beaches and swimming spots, the suburb attracts both tourists and Greater Sydney residents. Cronulla is located 26 kilometres south of the CBD. The trike tour for disability passenger was going very well at this point.

They stopped at a cafe for a stretch and a coffee. However, the hour was up way too quickly so David rode them back through the southern suburbs, over Tom Uglys Bridge and back to their home.

In conclusion, Hugh loved the trike tour for disability passenger just as much as he loved his first ride and all rides in between. Each ride took them on a different loop of the south eastern suburbs. Half the time it is just as much the fun of the experience than what the sights actually are. Above all, it is safe and our riders are all professional and experienced.
https://trolltours.com.au/product/design-your-own-ride/

The name was officially adopted to distinguish between the various subsequent bridges across Georges River, after the opening of the Captain Cook Bridge in 1965 and the Alfords Point Bridge in 1973. Tom Uglys Bridge are actually two road bridges, completed in 1929 and 1987.