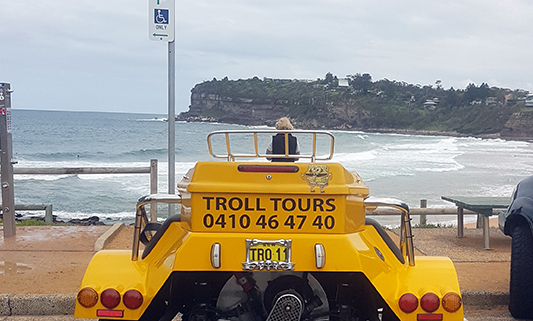 Before all the shutdowns came along, we had some Sydneysiders wanting to do a NorthernBeaches exploration by trike. Why not! They had a four hours spare and what better way to fill in the time? What better way is there to see Sydney than on the back of a trike! Craig picked the passengers up from in the CBD.

Firstly, they rode through the city and over the iconic Sydney Harbour Bridge. We always tell our passengers to look up and enjoy the unique view. The more than 6,000,000 rivets are so interesting and the arch is so iconic.

Continuing north east, they rode through Cremorne, Mosman and down past the Taronga Zoo to Bradleys Head. Make sure you look for the koalas eating and sleeping in the gum trees.

Similarly, Bradleys Head has wonderful views across Sydney Harbour to the Sydney Opera House, Harbour Bridge and the CBD. Continuing on, they rode past the lovely posh Balmoral Beach. Everyone who comes here loves it!

Next, they rode through the back streets before crossing the Spit Bridge, this is always fun. The lovely views of Middle Harbour and hundreds of yachts are hard to forget. Riding further up the hill they rode into the northern beach suburbs of Seaforth and Clontarf. Continuing on, they rode through Freshwater Beach, Curl Curl and Dee Why. All are such lovely beaches.

After that, they rode north to Newport Beach where they crossed over and followed Pittwater via Bilgola Plateau and Clareville. Then it was up to Avalon where they stopped at North Avalon Beach. So far, the NorthernBeaches exploration by trike tour was a success. However, the four hours was almost up so they rode back to the Sydney CBD via McCarrs Creek Road, Terry Hills and Wakehurst Parkway.

Craig dropped them off at the Rocks so they could continue wandering. In conclusion, the NorthernBeaches exploration by trike tour was a success.

The passengers wrote: “lots of fun and went all too quick”.