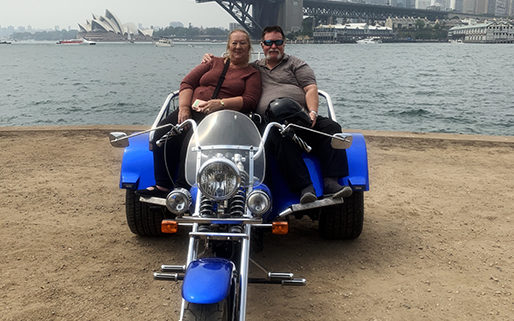 From Melbourne, our passengers are staying in a hotel in Sydney. The concierge rang us. Could we take them on a ride later in the week? Yes, we could. So, we organised the popular 3Bridges trike tour for them.

Steve picked Alan and Jennifer up from their hotel in Darling Harbour. Firstly, they rode through the city and over the iconic Sydney Harbour Bridge. We always tell our passengers to look up and enjoy the unique view. The rivets are so interesting and the arch is so iconic.

After there, they rode to Blues Point Reserve. This is another area where the views across Sydney Harbour towards the Sydney Opera House and the CBD are magnificent. Also, there is a lovely view of Luna Park.

They continued riding on through North Sydney and Crows Nest before joining River Road. It is a fun road to ride on. River Road leads to Burns Bay Road which, in turn, leads to another bridge but not one of the main three.

Continuing on, riding onto the incredible ANZAC Bridge – bridge #3. Similarly, it is also great to see without a roof over your head inhibiting the view.

Riding into the city is always interesting, but, because it is the school holidays the traffic is a lot better than usual. So, Steve was able to take them to Mrs Macquarie’s Point, Woolloomooloo & the X (Kings Cross) before returning them to their hotel.

Our passengers thought the popular 3Bridges trike tour was fantastic, a great way to see parts of the city only the locals know about.
https://trolltours.com.au/product/three-bridges-trike-tour/