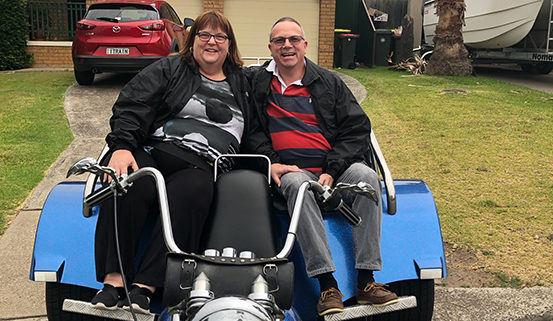 So, you’ve booked a concert to a popular band! How about arriving there in style? An interesting yet great idea! Our passengers booked a U2 concert trike transfer with us.

Brian picked them up from home, in Heathcote, part of the southern suburbs of Sydney. There are a couple of routes we could have gone. Riding via the Tom Uglys Bridge is the most direct route so we rode that way.

After the Tom Uglys Bridge, the route leads past part of the shoreline of Botany Bay. This leads through the suburb of Brighton-Le-Sands. Next, they drove past the southern area of the Sydney Kingsford-Smith Airport. Continuing on, they rode through some of the inner eastern suburbs of Sydney.

In conclusion, the U2 concert trike transfer was a success. Read their testimonial below:

“The service was fabulous and I would certainly recommend it. Thank you for the follow up and the photo.

We did enjoy the concert even though we got saturated, all part of the experience”.
Lisa
https://trolltours.com.au/product/design-your-own-ride/

Southern Sydney is the southern metropolitan area of Sydney. The area includes the suburbs south of the Georges River (colloquially known as ‘The Shire’). As a result, the area is often referred to as St George and Sutherland.