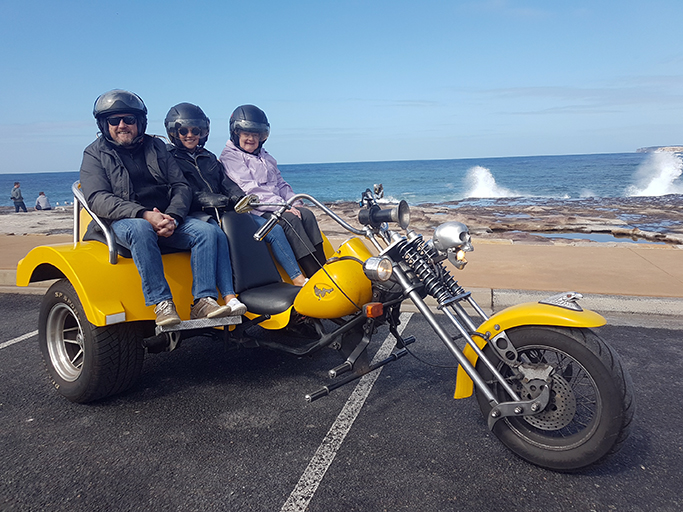 Damian organised the trike tour for his mum, his daughter and himself. The two hour Major Beaches trike tour was a fabulous choice. Our passengers saw so much and loved it all.

On the Major Beaches trike tour you should get to see the lower north shore area of Sydney and the eastern beaches area of Sydney. There is so much to see in Sydney that you really have to decide – and tell us – what you would like to see.

Craig picked our passengers up from the The Rocks. The Rocks is a very historic and impressive area of Sydney and became established shortly after the (Sydney) colony’s formation in 1788.

Then they all continued riding through the lower north shore suburbs. This meant they rode through Neutral Bay, Mosman and a few of the other posh suburbs in the area.

After this, they rode back across the Sydney Harbour Bridge to the Eastern Suburbs. This took them through the posh eastern suburbs of Rose Bay and Double Bay until they rode up the South Head Peninsula.

In addition, this took them to Watsons Bay and The Gap, as well as other areas around here. There is so much to see in Sydney, let alone the Eastern Suburbs. The Major Beaches trike tour is just the start of the sightseeing!

Watsons Bay sits on the end of the South Head peninsula and takes its name from the sheltered bay and anchorage on its western side, in Port Jackson (Sydney Harbour). It provides views across the harbour to the Sydney Harbour Bridge. The Gap is an ocean cliff on the eastern side with views to Manly at North Head and the Pacific Ocean. Vaucluse is the only adjacent suburb, to the south.

Even two hours is not enough! In other words, just choose what you’d like to see. Tell us and we will organise it for you.
https://trolltours.com.au/product/major-city-beaches-trike-tours/