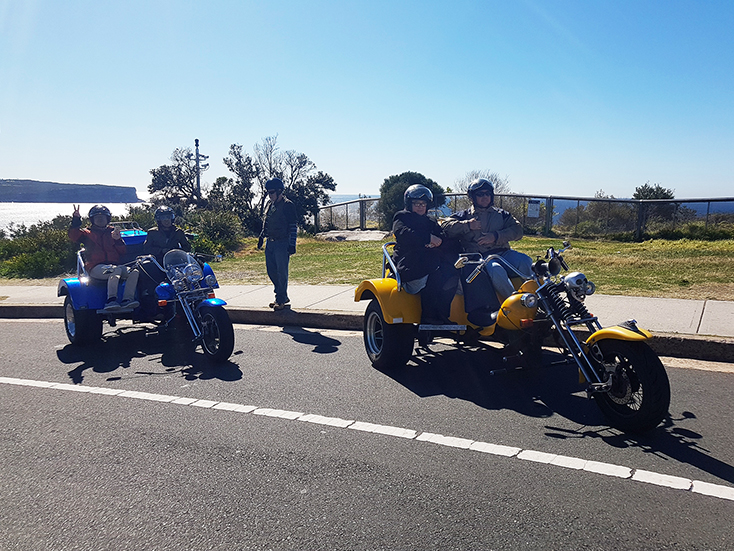 The Eastern Sydney’s trike tour was organised by Cath. She has done a trike tour with us before and loved it. She was entertaining friends who had come to Sydney. Cath thought a trike ride was a great idea to see the sights.

Cath had done a version of the Eastern Sydney Panorama. Similarly, that was her request this time. So Craig and Steve picked them up from their hotel in an inner east suburb of Sydney.

Firstly, they rode via the major thoroughfare of William Street to Rushcutters Bay. After that they rode through the posh eastern suburbs of Double Bay and Rose Bay. Continuing on, they rode up the South Head Peninsula.

Watsons Bay and The Gap

This leads to Watsons Bay, famous for a fish and chips restaurant. In addition, it is home to and ‘The Gap’ where they stopped for a look and photos. The Gap is a well known place for suicides in Australia.

Craig then continued the ride down to the famous Bondi Beach. Riding past the beach really does turn heads. Moreover, they stopped at the Bondi Beach life guard tower for photos. Famous for the TV program Bondi Rescue.

In addition, they rode further south past the lovely Tamarama and Bronte beaches before returning to the city via the famous Oxford Street. Home of the Mardi Gras Parade, which happens every year.

However, the 1.5 hours was now up. Craig returned them to their hotel. In conclusion, Eastern Sydney’s trike tour was a huge success. A very memorable and fun experience.
https://trolltours.com.au/product/design-your-own-ride/

Cath wrote to us:
Hi Katrina, We thoroughly enjoyed today. The guys were excellent hosts . They were very entertaining and had a wealth of knowledge.

Our Chinese visitors have said the tour was the highlight of their trip. We have actually discussed doing another tour later in the year. Feel free to use the photos from today.

Thanks again and all the best,
Cath