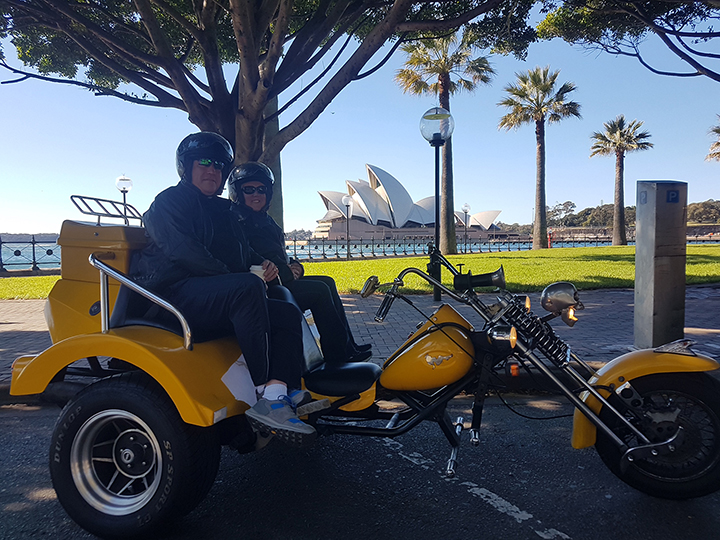 Jenny organised this trike tour Eastern Suburbs for her aunt and uncle. She wrote to us:

Hi Trevor,
I have previously had a ride with Craig and absolutely loved it.
We went The Gap and Bondi. If it is possible, could we add Mrs Macquarie’s Chair and Kings Cross?
My Aunty and Uncle are coming from America and it is just the best way to see the back streets in the open air.
Also, if possible could we please ask for Craig again?
Thank you
Jenny

We sure could and did. Craig picked Bob + Dawna up at their hotel, the Novotel Darling Harbour. Firstly they rode past Pier One on Hickson Road. This leads to Hickson Road Reserve which is a great photo opportunity. So, they stopped for a few photos which makes for a great memory.

Next, they rode through the Rocks. The Rocks are a very historic and lovely area of Sydney. After that, they headed down to Woolloomooloo, home of the famous Harry’s Cafe De Wheels.

Continuing up the hill, they arrived in the infamous Kings Cross. This is the red light district of Sydney. A very interesting drive as usually there is a lot happening. However, the area is not quite as ‘saucy’ as it used to be.

Riding further, they rode through the posh eastern suburbs of Rushcutters Bay and Rose Bay. Rose Bay has lovely views of Sydney Harbour.

Watsons Bay was next. It is on the South Head peninsula and is famous for fish and chips. Near there is The Gap, where they stopped for a look and photos. The Gap is a well known place for suicides in Australia. 😢

Craig then continued the ride down to the famous Bondi Beach. Riding past the beach really does turn heads. After that, they continued south along more of the eastern beaches. In addition, was Tamara and Bronte beaches.

However, the 1.5 hours was now up. Craig rode through the city and returned them to their hotel in Darling Harbour. In conclusion, the trike tour Eastern Suburbs was a huge success. A very memorable and fun experience.
https://trolltours.com.au/product/design-your-own-ride/