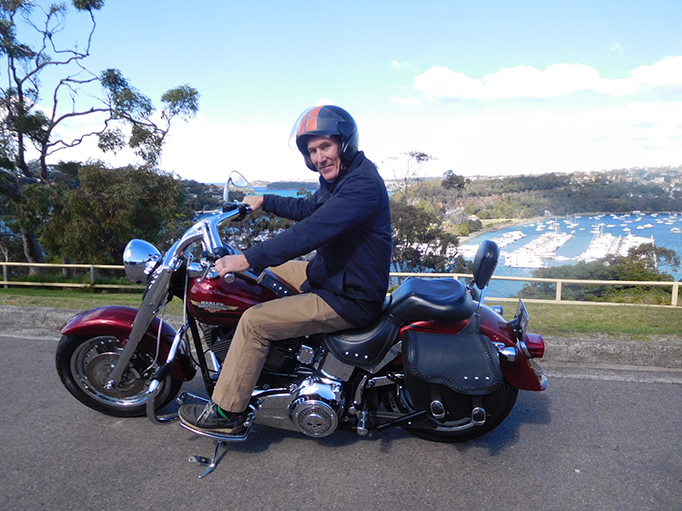 George organised the Harley north shore ride. He and his wife are down from Dubbo to do the City to Surf tomorrow. Dubbo is about 400 km north west of Sydney. So, why not do something fun and see the sights at the same time!? George is glad he did.

Our Harley rider Phil, picked George up from their hotel in the city. Firstly, he took him over the Sydney Harbour Bridge to Kirribilli, on the north side of the Harbour Bridge. There, they stopped for photos and a look at the wonderful views across Sydney Harbour towards the Sydney Opera House and the CBD. A view we never tire of. In addition, it also has an up-close view of the side and underneath of the bridge.

Continuing on, they headed down to Bradleys Head. Bradleys Head is a headland protruding from the north shore of Sydney Harbour. In addition, on the way down you will ride past Taronga Zoo. For instance, you may see koalas eating their leaves from the tree tops.

After that, they rode past Balmoral Beach. The Promenade along the Esplanade at Balmoral Beach was completed in 1926. It really is a lovely place and very popular with Sydneysiders during summer. It is a very safe place for a swim.

Next, the road led to the Spit Bridge lookout, where this photo was taken. It has beautiful views towards Middle Harbour and back towards Balmoral Beach.

However, the 1.5 hours was up so Phil rode George back to his hotel. In conclusion, the Harley north shore ride was a huge success and George couldn’t keep the smile off his face.
https://trolltours.com.au/product/design-your-own-ride/