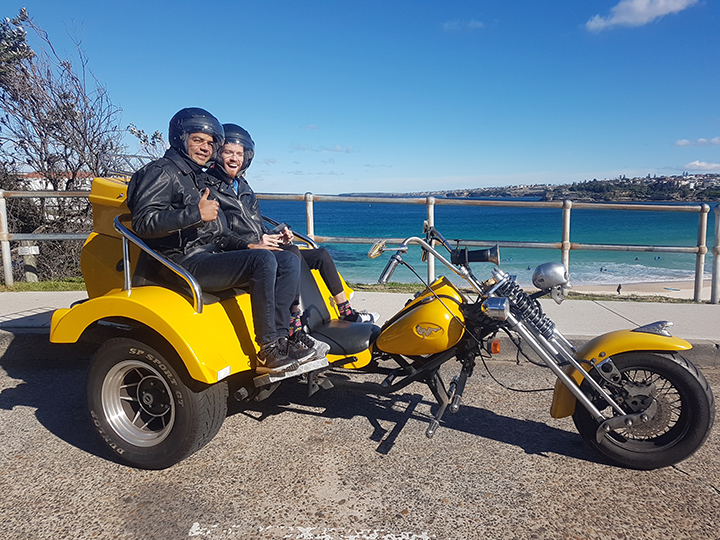 Previously Nick has taken trike rides with us. He absolutely loves being on the trike so his brother Ben organised the scenic Sydney trike tour. Nick has cerebral palsy and the trike is perfect for him. It is safe and stable with seatbelts for each passenger. Nick can sit in the middle behind the rider and hold on.

Craig picked Nick and his carer up from Kirribilli. Firstly, they enjoyed the beautiful view across Sydney Harbour to the Opera House. To the right, there is a wonderful view of the side and underneath of the Harbour Bridge.

Continuing on what we call “the Kirribilli Loop”, they rode under the north end of the Sydney Harbour Bridge. Similarly, this gives a very different perspective to the bridge from any other. They rode past the Luna Park entrance road and past North Sydney Olympic Pool before heading over the bridge.

Next, they rode through Woolloomooloo and past the famous Harry Cafe De Wheels. Then they rode up into the infamous red light district of Kings Cross. Kings Cross is no longer what it was in its heyday, but it is still interesting to ride through.

After that, they rode through the eastern suburbs of Rushcutters Bay and Vaucluse. Then they rode up the South Head Peninsula to the famous Watsons Bay, home to Doyles a famous fish and chips shop.

Near Watsons Bay is “The Gap”. It has wonderful views out to the Tasman Sea. Unfortunately, it is also called Suicide Gap as many people take their own lives here.

Then they rode back down the peninsula to the iconic Bondi Beach. They stopped for photos and to check out the view. Continuing on, they rode past the eastern beaches of Tamara and Bronte. This really was a scenic Sydney trike tour!

There was time to ride though the lovely Centennial Park. However, the 1.5 hours was just about up. So Craig rode them back over the Sydney Harbour Bridge and dropped them back at Jeffrey Street Wharf, Kirribilli.

In conclusion, the scenic Sydney trike tour was a huge success, Nick had a smile on his face the whole ride. https://trolltours.com.au/product/design-your-own-ride/