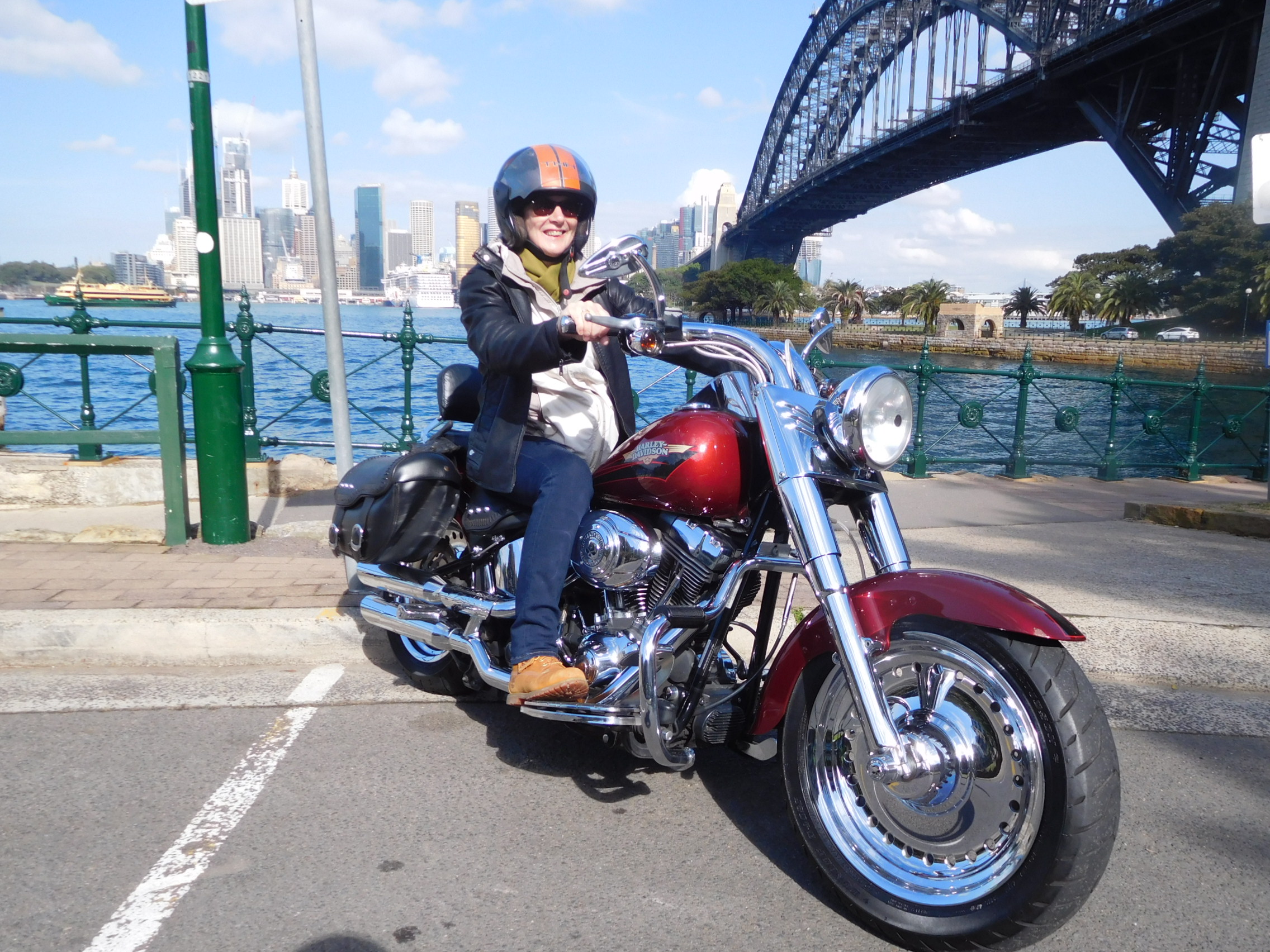 The 60th birthday Harley tour was a huge success. We organised Marian’s gift voucher with some of her family. They knew she would be coming to Australia from the UK for a holiday.

We reckon her brother and family (who bought the Gift Voucher) and her husband Spud, made her do it. Well, they had to as it was her 60th birthday Harley tour present!

Phil the Harley rider wrote – “Marian is out from the UK with her husband Spud to visit her brother. She was a bit hesitant at first but in the end she loved it – it “exceeded all expectations” were her words”.

Phil picked Marian up from The Rocks, in Sydney. As often happens, the rider and the passenger(s) discuss the route. This time, they both decided the 3 Bridges tour was the ideal ride to do.

So, after picking Marian up at the Rocks, he rode over the Sydney Harbour Bridge. As we keep telling everyone – look up! Without a roof blocking your view, you will really be able to appreciate the arches.

After that, they stopped at Jeffrey Street Wharf, Kirribilli on the north side of the Harbour Bridge. It has wonderful views across Sydney Harbour towards the Sydney Opera House and the CBD. A view we never tire of. In addition, it also has an up-close view of the side and underneath of the bridge.

They continued on riding onto the incredible ANZAC Bridge – bridge #3. Similarly, it is also great to see without a roof over your head inhibiting the view. Riding into the city is always interesting, However, time was up. Phil dropped Marian back at The Rocks. She thought the 60th birthday Harley tour was fantastic, a great way to see parts of the city only the locals know about.
https://trolltours.com.au/product/three-bridges-trike-tour/

In conclusion, 60th birthday Harley tour was a huge success, another “best birthday present ever”.

Hi Katrina,
I just wanted to let you know what a fantastic ride I had with Phil today. I was very nervous and he made me feel relaxed and safe. He was very friendly and knowledgeable.

The route was amazing, I saw so much. The ride exceeded my expectations and this was down to Phil and his gorgeous bike.
Will definitely be recommending this trip to any one visiting Sydney.

Thank-you so much for all your friendly help with the booking.
From a very happy
Marian