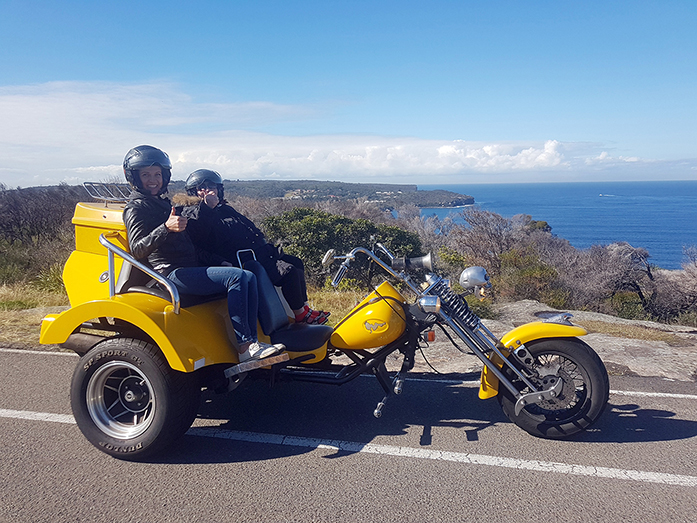 Patty is in a nursing home and a wish of hers was to go for a Harley ride. She isn’t capable of sitting on the back of a Harley but she can easily sit on the back of a trike. So we organised the Dobroyd Head trike tour which also included Manly.

Craig picked Patty and a carer up from the nursing home in North Manly. Firstly they rode to Clontarf and then onto Tanya Park at Dobroyd Head. The view across Sydney Harbour to both the Heads is just stunning.

Next they rode along the famous Manly Beach until they arrived at Freshwater Beach. Similarly, they rode past the beautiful beaches of Curl Curl and Dee Why beaches.

The general manager of the nursing home wrote:
“Patty had a wonderful time , she has requested to have another ride soon.
Craig was great good all round.
Regards
Esther”

The general manager is giving all the affiliated nursing homes our details. The trike is perfect for those who have physical or mental disabilities. The trikes all have seat belts and we only use accredited, professional and safe riders.

https://trolltours.com.au/product/design-your-own-ride/
The Northern Beaches is an area in the northern coastal suburbs of Sydney, in the state of New South Wales. It is near the Pacific coast. This area extends south to the entrance of Port Jackson (Sydney Harbour), west to Middle Harbour and north to the entrance of Broken Bay.

We have many scenic tours all around Sydney, this is just an example of one of them. Similarly, we can adjust any tour to take you where you’d like to go.