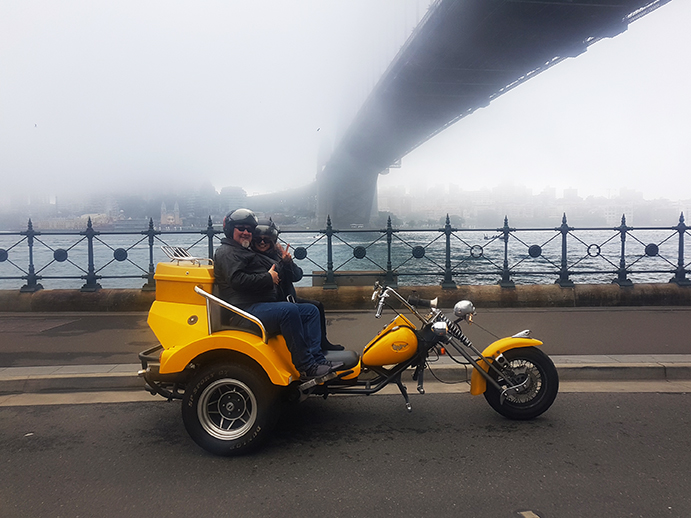 The 50th birthday trike tour was a present from Mark to his wife Arlene. They are having a holiday in Sydney to celebrate. Sydney is very different to Adelaide so they decided a tour would be the most interesting way to see the sights.

They actually decided to do the 3 Bridges ride. This way they saw the beautiful views our major bridges have to offer. The route is also off the beaten track so our passengers saw more than the average visitor to Sydney does.

Craig, our trike rider, picked Arlene and Mark up from their hotel. Firstly, they rode over the Sydney Harbour Bridge. There was a thick fog which made the city feel quite eerie. It was definitely something different to the usual. However, it did not ruin the experience. Although the view was not the usual blue sky and blue water, it was still amazing.

After that, they stopped at Kirribilli on the north side of the Harbour Bridge. It has wonderful views across Sydney Harbour towards the Sydney Opera House and the CBD. A view we never tire of. In addition, it also has an up-close view of the side and underneath of the bridge.

They continued on riding onto the incredible ANZAC Bridge – bridge #3. Similarly, it is also great to see without a roof over your head inhibiting the view. Riding into the city is always interesting, however, time was up so Craig dropped the passengers near Madame Tussuades. Our passengers thought the 50th birthday trike tour was fantastic, a great way to see parts of the city only the locals know about.
https://trolltours.com.au/product/three-bridges-trike-tour/

In conclusion, the 50th birthday trike tour was a huge success, another “best birthday present ever”.