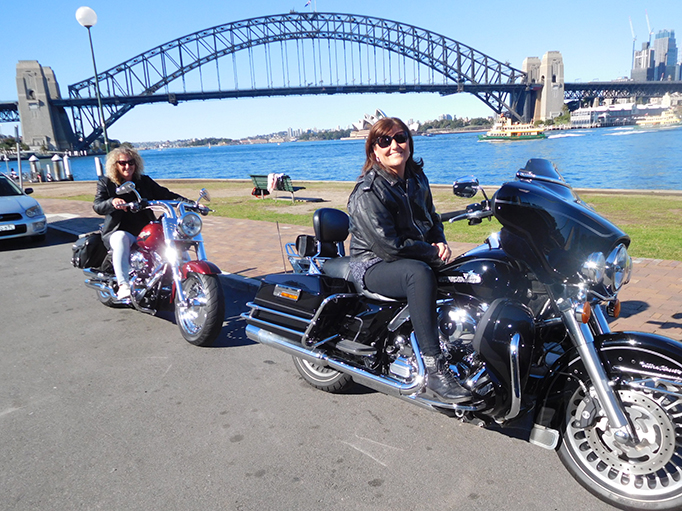 The Harley tour around Sydney sights was a present for Teresa’s birthday. She and Chris came up from Wollongong for the day. To celebrate and to do the Harley ride.

Phil and Perry picked them up from Central Station. Firstly, they rode through the city and onto the iconic Sydney Harbour Bridge. As we always tell everyone – make sure you look up and see the arches. It is a great view without a car roof blocking your view. Continuing on, they did the Kirribilli Loop.

We made this name up to describe this section of the ride. Most importantly, it is one of the most popular areas to take our passengers. We stop near Jeffrey Street Wharf, Kirribilli. The views across Sydney Harbour to the Sydney Opera House and the CBD are breath taking.

The Kirribilli Loop takes you under the north side of the Harbour Bridge. A totally opposite perspective than riding across it. After that, ride past the entrance to Luna Park and the North Sydney Olympic Pool.

Back over the harbour bridge to Mrs Macquarie’s Point. This is where Mrs Macquarie’s Chair is located but we can’t see it from the road. Next, they rode through Woolloomooloo and past the famous Harry’s Cafe De Wheels. Up into the infamous Kings Cross though it’s tamed down compared to its heyday. They continued on into the city. However, time was up so they were dropped off in Chinatown. Then they could keep celebrating with lunch.

The Harley tour around Sydney sights was the best present ever. In conclusion, this is an experience they will always remember – the adventure of a lifetime!
https://trolltours.com.au/product/design-your-own-ride/

As of June 2017, Sydney’s estimated metropolitan population was 5,230,330 and is home to approximately 65% of the state’s population. Sydney is the most populous city in Australia and Oceania.