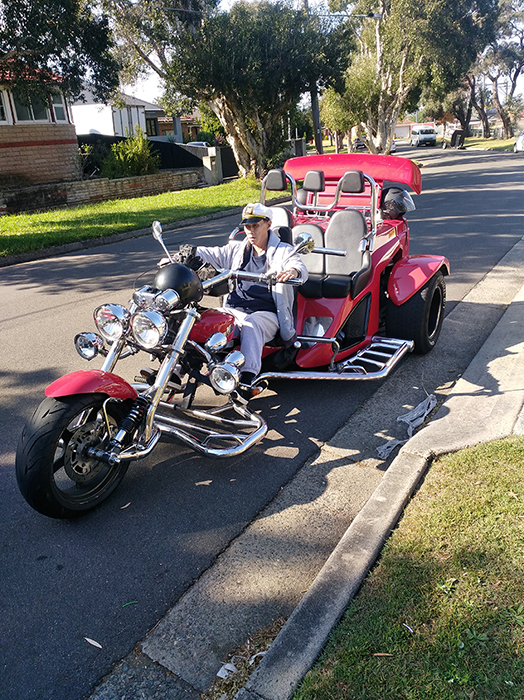 We were contacted by Hugh’s mentor. Are we able to design a ride where we pick up from Hugh’s place? After a few chats we designed the southern adventure trike tour. Hugh has a slight disability so he came on the trike with his carer.

Barry picked them up from their place and took them for an hour around the area. The southern suburbs of Sydney are picturesque, with two long bridges over the Georges River. They rode through suburbs such as Beverly Hills. Not as well known as the one in America but well known in ‘The Shire’.

Next was Hurstville and South Hurstville. However it was not worth stopping there so they kept driving down the infamous Princes Highway. Often the traffic can be horrible but not today. In addition, it was election day so a lot of interesting things to look at.

After that was the famous Tom Uglys Bridge. Tom Uglys Bridge is actually composed of two bridges, completed in 1929 and 1987. The original one became way too small for the amount of traffic, as Sydney grew. Therefore they built the second bridge.

After that they rode through suburbs such as Gymea and Kirrawee. Over the small Woronora River and onto Alfords Point Road. Back over the Georges River using a different bridge.

Half way through the tour they stopped for a half hour lunch break. Barry knows the area well so took them to a nice place for a quick bite to eat. We allowed half an hour for lunch.

It was a real adventure for Hugh (and his carer). Above all, he had such a great time he wants to do it again. Even the southern adventure trike tour again, he doesn’t mind.
https://trolltours.com.au/product/design-your-own-ride/

The Sutherland Shire, is colloquially known as “The Shire” and it has been featured in several reality television series.