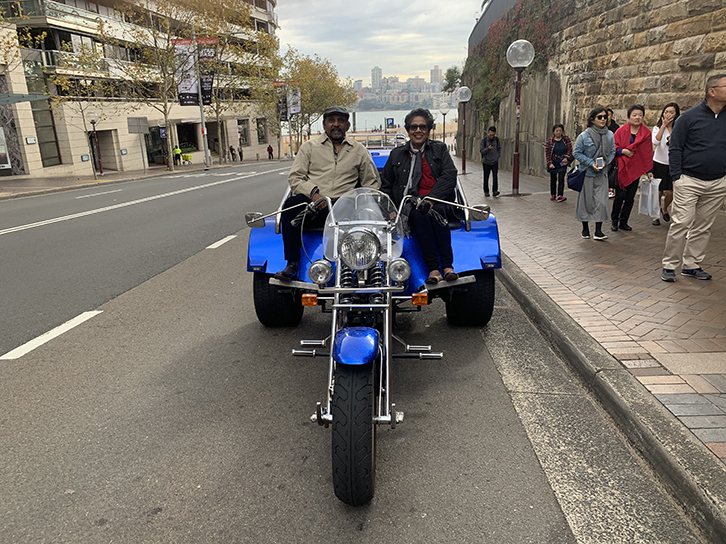 Visiting Sydney for a short while, our passengers organised the Bondi Beach trike tour. They thought it would be a fun way to see a lot of the main Sydney sights, in a short period of time. It was!

They had been exploring parts of Circular Quay that morning so met Steve, our trike rider, near the Sydney Opera House. They rode through the eastern suburbs to Bronte Beach. Continuing on, they arrived at most people’s favourite beach – Tamarama. It is tucked away on Mackenzies Bay.

The next sight was the most famous of them all – Bondi Beach. We know some great places there to have a look and a quick photo.

The Gap and Watsons Bay

From there they headed North to infamous The Gap. It has beautiful views looking out to the South Pacific Ocean. They had a look at famous Watsons Bay and drove past Doyles Restaurant. An icon of Sydney, Doyles on the Beach at Watsons Bay is the original from 1885.

It is on a peninsula so they headed back down south. They cut through the Eastern Suburbs of Rose Bay, Rushcutters Bay and more. Up through the infamous Kings Cross, down past Harry’s Cafe De Wheels and back to drop off at the Opera House.

The Bondi Beach trike tour was a great success. Obviously they saw a lot more than just Bondi Beach, it is just one of the many iconic places to see in Sydney. We can show you all or any of them on our tours. https://trolltours.com.au/product/design-your-own-ride/

We ride past the sweeping white-sand crescent of Bondi Beach because it is one of Australia’s most iconic beaches. Reliable waves draw surfers while, nearby, hardy locals swim in the Icebergs ocean pool year-round.

Bronte Beach is a small but popular recreational beach 2 kilometres south of Bondi Beach. The beaches are linked by a paved coastal footpath along the rocky cliff tops.