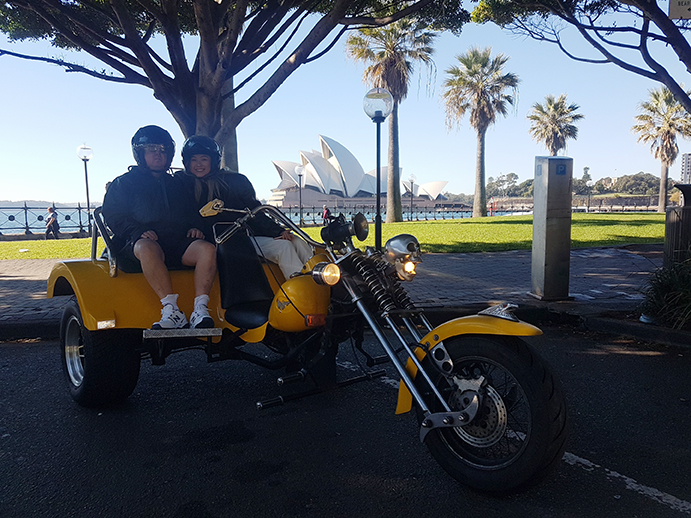 Charles and Lilly do a trike ride with us every time they come to Sydney. They are from Port Macquarie which is on the far north coast of NSW. This time was no different so they booked another ride. A trike tour Opera House and Sydney Harbour Bridge.

Craig picked them up from their hotel in the Rocks. He rode them around Dawes Point. This follows the harbour around to where the ferries come into and leave Circular Quay. Across Hickson Road Reserve and the water is a lovely view of the Sydney Opera House.

They continued riding and drove onto the Sydney Harbour Bridge. It is always a fabulous sight to see the arches coming towards you. Remember to look up as you’ll have a great view of the arches.

They rode to Blues Point Reserve for photos and to see the beautiful view. The view over Sydney Harbour is always spectacular. You will see a view of the Harbour Bridge from the west, looking east.

the Harbour Bridge and the Opera House

Underneath the Harbour Bridge you will see the Opera House. Two Aussie icons in the one picture. They continued on to Kirribilli and some of North Sydney before heading back over the bridge.

A trike tour Opera House and Sydney Harbour Bridge is a wonderful ride. We can change this and any tour, to suit places you would like to see.
https://trolltours.com.au/product/harbour-bridge-ride/

We legally can’t ride onto the Sydney Opera House grounds. We love to see it from the distance anyway. A multi-venue performing arts centre at Sydney Harbour, it is one of the 20th century’s most famous and distinctive buildings. Designed by Danish architect Jørn Utzon, the building was formally opened on 20 October 1973.

On 28 June 2007, the Sydney Opera House became a UNESCO World Heritage Site. The building and its surrounds occupy the whole of Bennelong Point on Sydney Harbour.