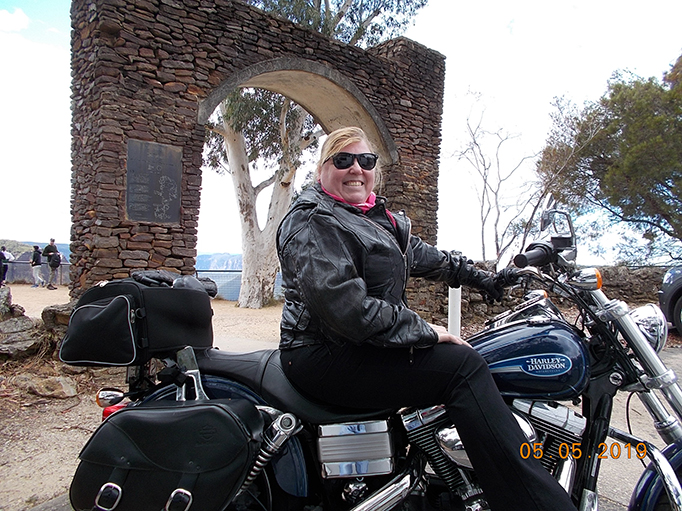 Natalie was given a Blue Mountains Harley exploration tour by her friend Nataly. It was a surprise and was it ever – a great one! They met Rock, our Harley rider, at Katoomba Railway Station. They rode for 2 hours around the wonderful area of the upper Blue Mountains.

Of course, they had to see the iconic Three Sisters. They are an unusual rock formation towering above the Jamison Valley. The Three Sisters are at Echo Point in Katoomba, on the cliff edge overlooking the Blue Mountains National Park.

They continued along Cliff Drive to the relaxed townships of Leura and Wentworth Falls. Then they thundered along to the Great Western Highway and deep into the Megalong Valley toward the picturesque Mount Victoria.

There are stunning views along this whole Harley ride. They continued cruising Govetts Leap before returning to Katoomba Railway Station where Rock the ride first began. He also took Nataly on the Harley around the block, so she could experience the Harley as well.

The Blue Mountains Harley exploration tour was a great surprise birthday present. We may have repeat rides! They are going to leave feed back on the Facebook, they loved the Harley tour so much.
https://trolltours.com.au/product/design-your-own-ride
https://www.bluemts.com.au/info/about/maps

The Legend of the Three Sisters

According to Gundungurra Dreaming, three beautiful sisters named Meehni, Wimlah and Gunnedoo. They once lived with the Gundungurra people in the Jamison Valley. The maidens were in love with three brothers from the neighbouring Dharruk people. Marriage was forbidden by tribal law.

The brothers were warriors and decided to take the maidens by force. Tribal war forced the Kuradjuri (clever man) of the Gundungurra people to turn the sisters into stone. He intended to restore them after the danger had passed and the war had ended.

Unfortunately, the Kuradjuri (clever man) was killed in the battle. To this day nobody has been able to break the spell. Noone can turn the Three Sisters back to their natural form.
There are a number of versions of this legend.