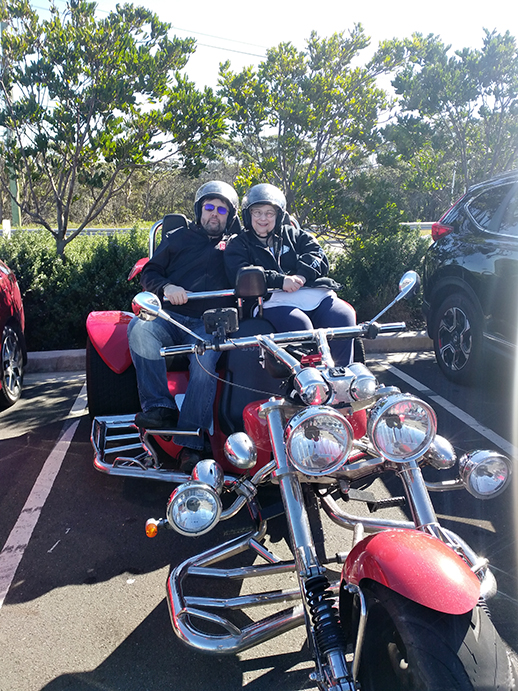 Barry picked them up from their hotel in the CBD. They travelled through the southern suburbs of Sydney to the Royal National Park. It is Australia’s first National Park and after Yellowstone in the U.S.A. it was the second National Park in the world to be established.

After travelling through the relaxing natural Australian bush, we travel  the road between Coalcliff and Clifton, it used to have some scary moments. The potential of falling debris or subsidence into the sea made it necessary to close the road, but all is well again. The impressive 665 metre Sea Cliff Bridge is now in operation, snaking its way around the cliffs and over the water, offering a far safer but spectacular route.

Hold on tight while we head home via the Bulli Pass and Princes Highway. Our passengers loved the trike tour Southern Spectacular and are so happy they did this ride. We are so pleased they had such a great experience. We do try hard to make sure everyone has fun in Sydney and leave with wonderful memories.

An hour south of Sydney, the direct way, we take you the scenic way. The Sea Cliff Bridge has been a major tourist spot since it opened in 2005. It features an scenic walkway surrounded by rocky cliffs. Sea Cliff Bridge has become a place of many accidental deaths, as admirers hike to the top of the cliff to see the bridge from above.