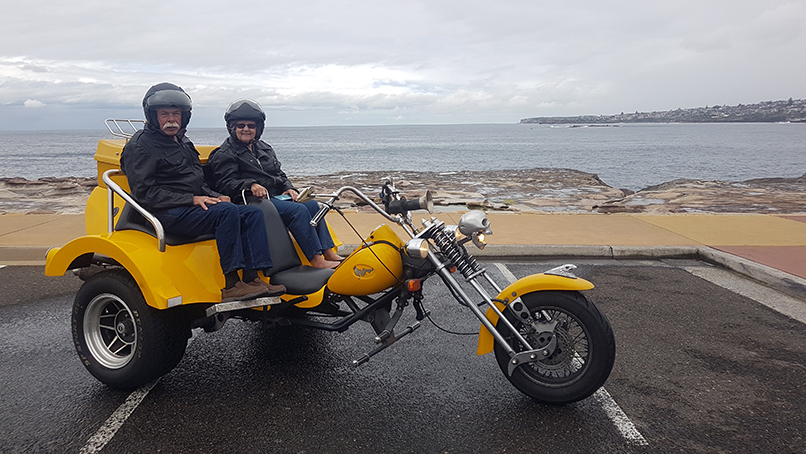 A 70th birthday trike tour was organised for Sandra. Arnie her husband came along for the ride as well.

Craig picked them up from a hotel in Redfern and rode up the famous Oxford Street. This is where the Mardi Gras Parade goes along. They then went to Centennial Park and loved it. It is a lovely, large park with plenty of wildlife and usually horses as well.

Next they rode to South Coogee Beach and then north past the lovely eastern beaches – Clovelly, Bronte and Bondi Beach. They returned to the drop off place via the posh Rose Bay and Double Bay.

Their daughter wrote to us, ” they had a great time, they loved the trike, said the driver Craig was lovely and were just grateful that the weather cleared up so they could ride”. A 70th birthday trike tour is a great present, something memorable and fun to do. The Seniors can do it easily as once they are on the trike they don’t need to walk or get off until the end.

A little about two places they rode through

Centennial Parklands was originally a swamp and then set aside as land for the water source for Sydney, Centennial Park was reconstructed as a public park and opened in 1888. Sir Henry Parkes’ vision was to create a ‘People’s Park’ in which the citizens of Sydney could ‘take in the air’ away from the Sydney town centre.