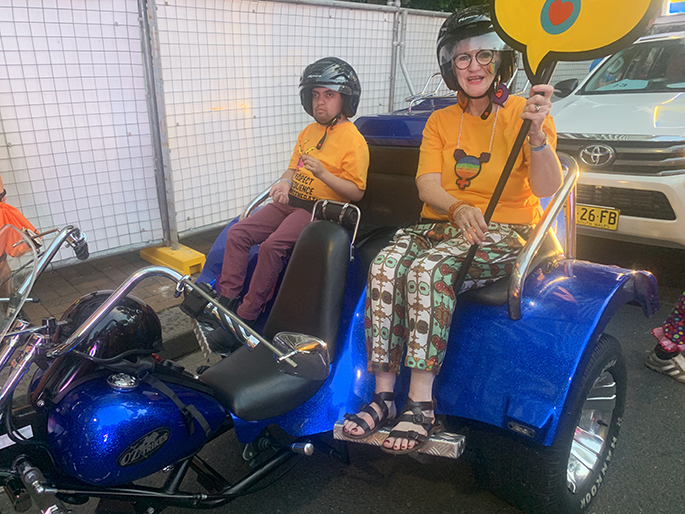 For the last six years we have supplied a Mardi Gras Parade trike. Each time it has been for gay people with a disability. They absolutely love it. We organise with our customer a pick up place and time. It depends on where their float is in the parade as to what time we turn up.

We rode around the city to Hyde Park where the parade starts from. This year we were the fourth float so we arrived early. Steve was our rider this year and he was kept entertained by the other participants in the parade.

The parade takes about 1 hour, it meanders up Oxford Street at quite a good walking pace. At the end of the parade the floats disperse and most participants stay up and party all night.
https://trolltours.com.au/product/design-your-own-ride/

A Mardi Gras Parade trike is a great vehicle to use. Our passengers can wave and can be seen by the onlookers lining the road.

On a cold night in Darlinghurst, Sydney in 1978, a small group of protestors formed to contribute to the international Gay Celebrations, the resulting police violence and arrests created a defining night in not only Sydney’s GLBTQI community but Australia’s cultural heritage.

“You could hear them in Darlinghurst police station being beaten up and crying out from pain. The night had gone from nerve-wracking to exhilarating to traumatic all in the space of a few hours. The police attack made us more determined to run Mardi Gras the next year.”

Over the months that followed, more protests and arrests took place – and the actions of the authorities came to be seen as heavy handed. By April 1979 the Parliament of NSW repealed the NSW Summary Offences Act legislation that had allowed the arrests to be made. As such that first Mardi Gras march was a major civil rights milestone beyond the gay community. Up to 3,000 people marched in an incident-free parade in 1979.

Here is a link to the history of the Sydney Mardi Gras.
http://www.mardigras.org.au/timeline