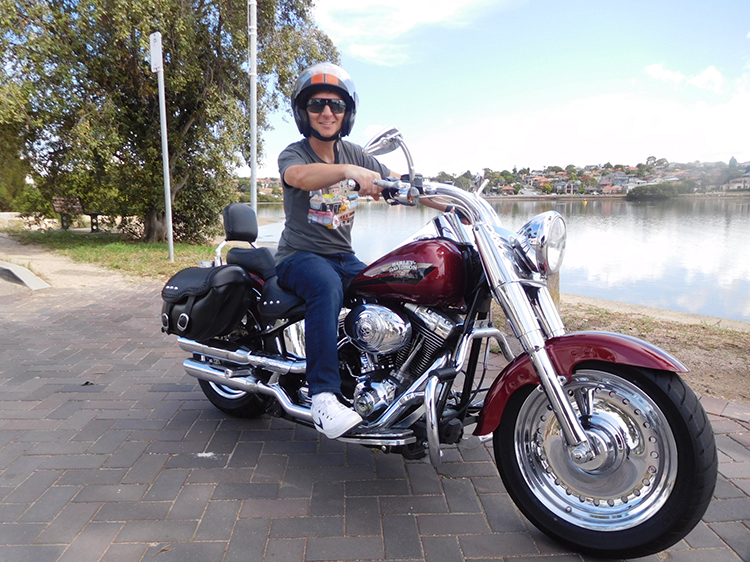 David was given a Harley ride 40th present from his in-laws. They bought a Gift Voucher from us so David could choose a time and date that was convenient for him. It is a great way to celebrate and something different from the usual birthday presents.

Phil picked him up from Petersham in the inner-west of Sydney. They rode to the wonderful Anzac Bridge to start the 3 Bridges run. Next on the 3 Bridges run is the iconic Sydney Harbour Bridge. After riding over the Bridge they did the Kirribilli Loop. This does a loop along part of Sydney Harbour and you can see the wonderful views towards the Opera House. It also takes you under the north end of the Bridge which is a different perspective to be on it.

Next they rode into the lower north shore suburbs until they reached the inner-west. This led them to the interesting Gladesville Bridge. It has wonderful views looking east to the city and the Harbour Bridge.

After riding over the Gladesville Bridge they joined up with a main arterial thoroughfare of Victoria Road. They travelled along it for a short while before turning off into the inner west suburb of Drummoyne and Rodd Point. They followed part of the Bay Run. This is a 7 km walking and bike riding track. People come from all over Sydney to use it. It follows Iron Cove, which is part of Parramatta River.

They then rode back to the drop off point in Marrickville. The Harley ride 40th birthday present was a lot of fun and even though David is a Sydneysider, he saw things he hadn’t seen before.

The Sydney Harbour Bridge is a heritage-listed steel through arch bridge across Sydney Harbour that carries rail, vehicular, bicycle, and pedestrian traffic between the CBD and the North Shore. The dramatic view of the bridge, the harbour, and the nearby Sydney Opera House is an iconic image of Sydney, and Australia itself. The bridge is nicknamed “The Coathanger” because of its arch-based design