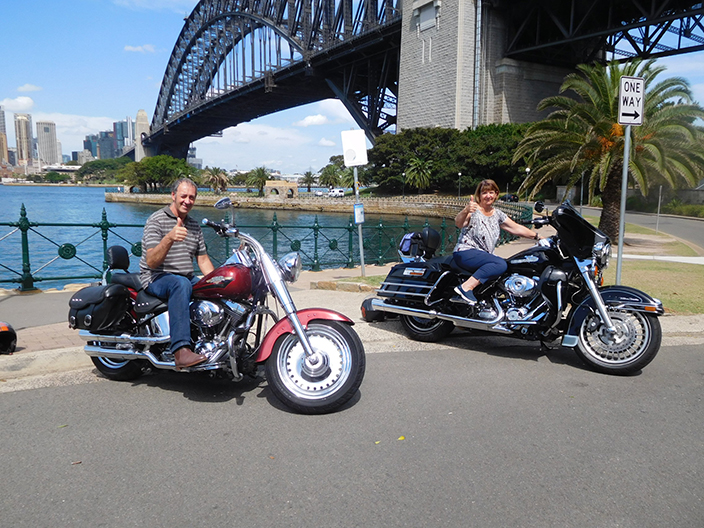 A wedding anniversary Harley tour was a great way to celebrate an important occasion. Kevin was given the Harley ride as a Christmas present. Julie decided she’d like to do a Harley ride as well.

They are from Orange (4 hours west of Sydney) and decided to celebrate their wedding anniversary by doing the Harley ride when they came to Sydney. Phil and Perry picked them up from their hotel and took them on the experience of a lifetime.

They continued into North Sydney for a quick look before heading back over the bridge. Then they rode past the beautiful Royal Botanical Gardens. There is a beautiful view towards the west of the Opera House and the Harbour Bridge. Next they rode past Mrs Macquarie’s Chair, a chair carved out of stone. They rode into Woolloomooloo where the iconic and original Harry’s Cafe De Wheels is located.

They continued on through the infamous Kings Cross before heading to Circular Quay. So then they could start to explore Sydney on foot and have some lunch.

A wedding anniversary Harley tour was a great celebration of an important occasion. An experience they will never forget and one they absolutely loved.

Mrs Macquarie’s Chair (also known as Lady Macquarie’s Chair) is an exposed sandstone rock cut into the shape of a bench. It is on a peninsula in Sydney Harbour. It was hand carved by convicts in 1810 for Elizabeth Macquarie. She was the wife of Major-General Lachlan Macquarie, Governor of NSW.