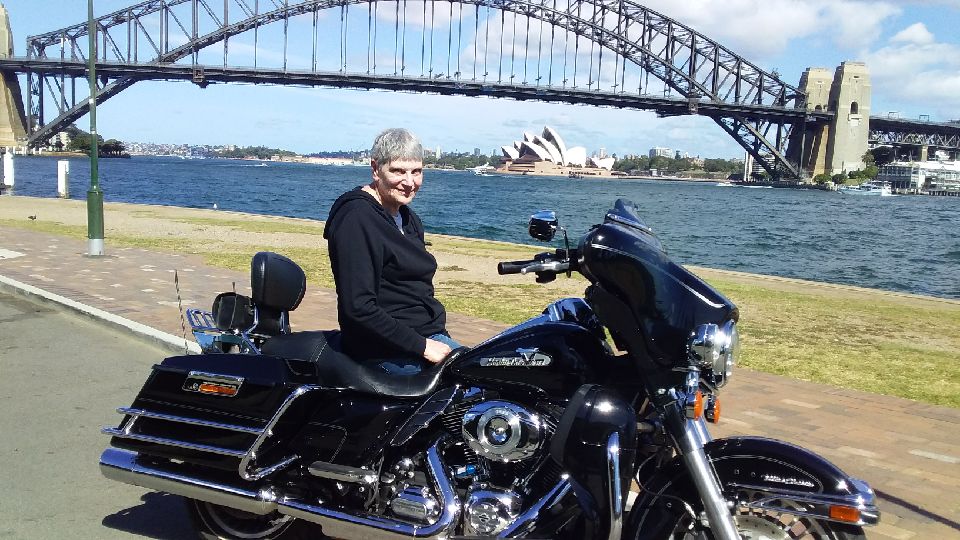 Pauline thought a Sydney city Harley tour would be an exciting experience and it was. Perry picked her up from her hotel and rode her around the city. They rode over the Sydney Harbour Bridge to Blues Point Reserve. They stopped for photos and to admire the beautiful view. It really is a lovely view across Sydney Harbour to the Harbour Bridge and the Sydney Opera House.

They explored more of the northern suburbs before heading to the Royal Botanical Gardens and Mrs Macquarie’s Chair. This area also has beautiful views towards the harbour and the iconic sights of The Bridge and Opera House.

Next they drove through Woolloomooloo and past the original and iconic Harry’s Cafe De Wheels. The story of ‘Harry’s Café de Wheels’ goes back to the depression years of the late 1930’s. It is known for its delicious pies and hot dogs. It is an interesting read so there is a link to the site at the end of this tour description.

Perry rode through the city with Pauline before dropping her back at her hotel so she could continue exploring our wonderful city on foot. A Sydney city Harley tour really is a great way to see a lot of the famous sights in such a short time.
https://trolltours.com.au/product/design-your-own-ride/

The phrase ‘Café de Wheels’ came about as the city council of the day insisted that mobile food caravans move a minimum of 12 inches a day. Harry dutifully obeyed and thus the name was expanded to Harry’s Café de Wheels. https://www.harryscafedewheels.com.au/history