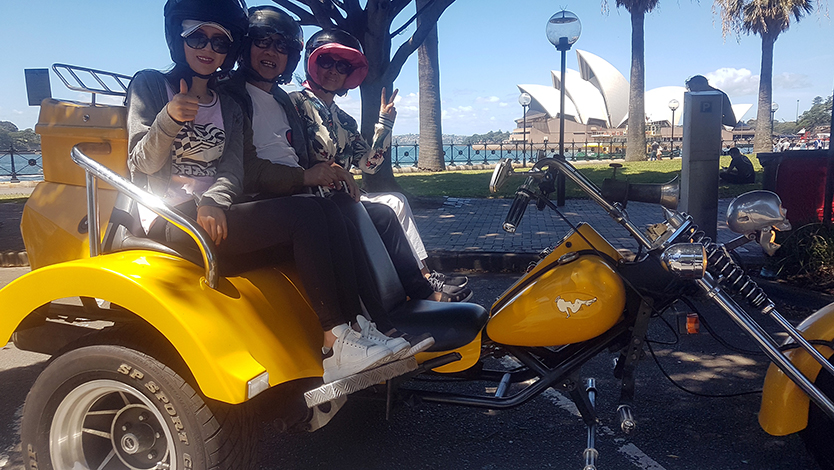 Trike touring around Sydney was the best way to see Sydney in such a short time frame. They organised the Eastern Panorama tour with us. Firstly they had a lovely lunch at the Sydney Fish Markets at Pyrmont. Then Craig picked them up from there and took them on the tour.

They rode under the Sydney Harbour Bridge at Dawes Point, it has lovely views across the harbour to Luna Park. There are also great views of the Opera House across Hickson Road Reserve. It is the area where the ferries come and go past which we find interesting.

Next they rode around the Royal Botanical Gardens and past Mrs Macquarie’s Chair. It also has lovely views of the Opera House and the Harbour Bridge, from a different perspective. They continued through Woollomooloo and through the infamous Kings Cross.

Next stop was Rose Bay where the seaplanes take off, it is a lovely scenic area. They continued further into the eastern suburbs and of course they had to visit the famous Bondi Beach. They saw a few other sights before heading back into the city. They were dropped off to continue exploring by foot. Trike touring around Sydney definitely is a fun experience and you will definitely get to see an overview of certain parts of the city.

Dawes Point is located on the north-western edge of the Sydney central business district, at the southern end of Sydney Harbour Bridge, adjacent to The Rocks. It has a lot of first settlement history. Lieutenant William Dawes (1762-1836), was an astronomer with the First Fleet. The point was renamed in honour of Dawes. In 1788 it was the site of the first guns mounted in Sydney by Dawes. It also contained Sydney’s first cemetery and later Dawes Point Battery.
https://en.wikipedia.org/wiki/Dawes_Point,_New_South_Wales