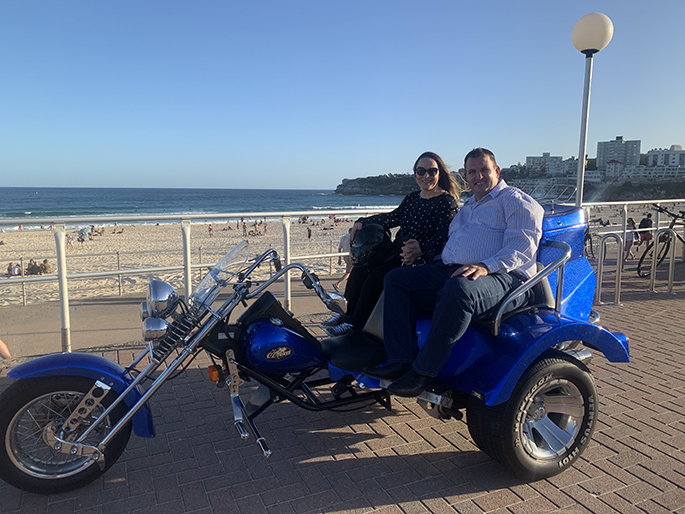 A romantic, John organised a Valentine present trike tour for his lovely wife. Steve picked them up from their home in the eastern suburbs of Sydney. He took them on a romantic ride through the eastern suburb where they stopped to look at the famous Bondi Beach which was still busy in the late afternoon, as it always is. They continued south along the coastline and rode past the lovely beaches such as Tamarama and Coogee.

Steve then turned around and rode them back through Centennial Park and some of the inner eastern suburbs to a local restaurant in Woollahra. The Valentine present trike tour was an unusual but very fun experience to do on Valentine’s Day. It doesn’t have to be for Valentine’s Day, we celebrate love everyday of the year.

Bondi Beach is a popular beach and the name of the surrounding suburb and is located 7 km (4 mi) east of the Sydney CBD. Bondi Beach is one of the most visited tourist sites in Australia.

The Tasman Sea and Coogee Bay along with Coogee Beach lie towards the eastern side of the suburb. The beach is popular among families and famous for its safe swimming conditions.

Woollahra is an Aboriginal word meaning meeting ground or a sitting down place. It was adopted by Sir Daniel Cooper, 1st Baronet (1821–1902), the first speaker of the legislative assembly of NSW, when he laid the foundations of Woollahra House, Point Piper in 1856. Cooper and his descendants were responsible for the establishment and progress of the suburb. The suburb name was taken from his house name.

Woollahra was the home of John McGarvie Smith, a metallurgist and biochemist who produced the first preservable anthrax vaccine.