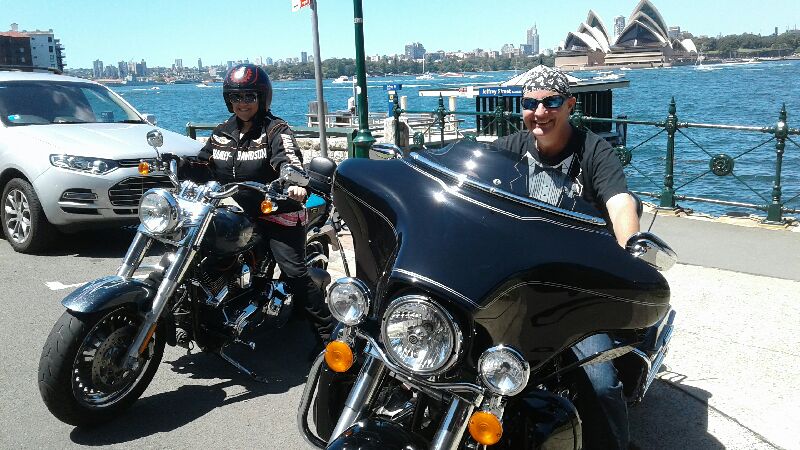 It was Doreen’s 50th birthday so Narelle bought them both a 50th birthday Harley tour. They live about an hour south west of Sydney so came up especially for the ride. They heard the Harleys roar up the street way before they could see them. Jungle and Perry picked them up from Surry Hills and took them on the ride of their life.

Next they rode back over the bridge to the Royal Botanical Gardens. They stopped so Doreen + Narelle could go for a short stroll to see the beautiful views. The riders then took them back to Surry Hills so they could go out for a nice lunch and continue the 50th birthday celebrations.

Doreen had ridden pilion on a Harley many times in the past and loved it. She mentioned how much she missed it to Narelle who thought it a great idea to organise a 50th birthday Harley tour to celebrate. It was a hit, Doreen loved it.
https://trolltours.com.au/product/design-your-own-ride/

Opened in 1816, the garden is the oldest scientific institution in Australia and one of the most important historic botanical institutions in the world.

The Garden is open every day of the year and access is free. Its stunning position on Sydney Harbour, the Sydney Opera House and the large public parklands of The Domain ensure it is one of the most visited attractions in Sydney. There are many events on in the gardens, the link below will show you. https://www.rbgsyd.nsw.gov.au