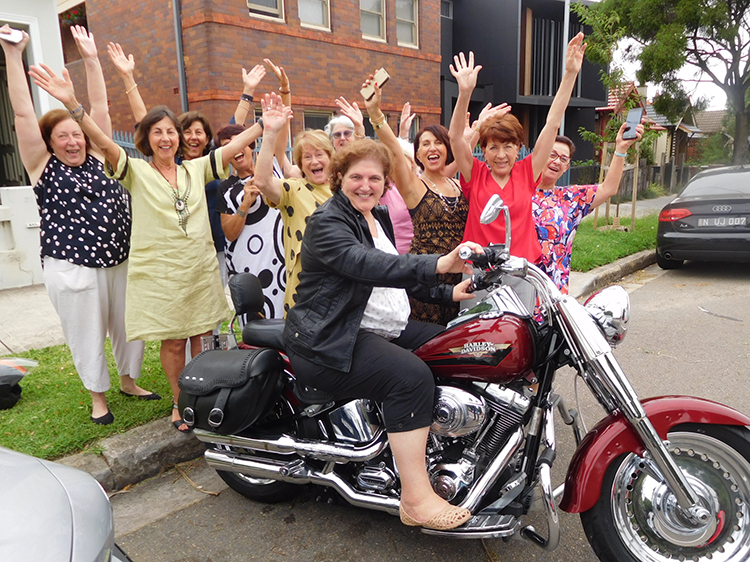 Our Harley rider Phil picked her up in Petersham, in the inner west of Sydney. He rode her on the back of the Harley to many of the interesting suburbs of the inner west. These include Balmain, Drummoyne and Rodd Point. They continued on to Norton St, Leichhardt and then to the drop off point. A surprise birthday Harley ride is a great present for almost anyone!

Anne absolutely loved her Harley ride. Liz wrote:
“Hi Phil thanks so much for making it special for Anne. She loved the ride and your chats. Couldn’t be a better experience.
Kind regards
Liz”

Norton Street is in the suburb of Leichhardt in Sydney, Australia. It is located 5 kilometres west of the Sydney central business district and is the main commercial street in the suburb.

Norton Street contains a mix of residential buildings, restaurants (Italian and others), cafés, eateries and individual retail outlets, including several bookstores and grocery shops. There are also hotels, a Palace Cinema, Norton Street Grocer and two of the suburb’s three shopping centres: Norton Plaza and the Italian Forum.

At the southern end of the street is the Italian Forum, notable for its design which seeks to emulate the feel of a Mediterranean town piazza featuring a fountain, ringed by cafés and upmarket fashion shops.

Balmain is a suburb in the Inner West of Sydney . Balmain is located 6 km west of the Sydney central business district, in the local government area of the Inner West Council. It sits on a small peninsula that juts out of Sydney Harbour, directly opposite Milson’s Point.

It is located on the Balmain Peninsula surrounded by Port Jackson, adjacent to the suburbs of Rozelle to the south-west, Birchgrove to the north-west, and Balmain East to the east. Iron Cove sits on the western side of the peninsula, with White Bay on the south-east side and Mort Bay on the north-east side.

Traditionally Blue Collar, Balmain was where the industrial roots of the Trade Unionist movement began. It has become established in Australian working-class culture and history, due to being the place where the Australian Labor Party formed in 1891 and its social history and status is of high cultural significance to both Sydney and New South Wales. Today, the ALP contends with the Australian Greens for political prominence in Balmain, and Jamie Parker of the Greens holds the State seat of Balmain.