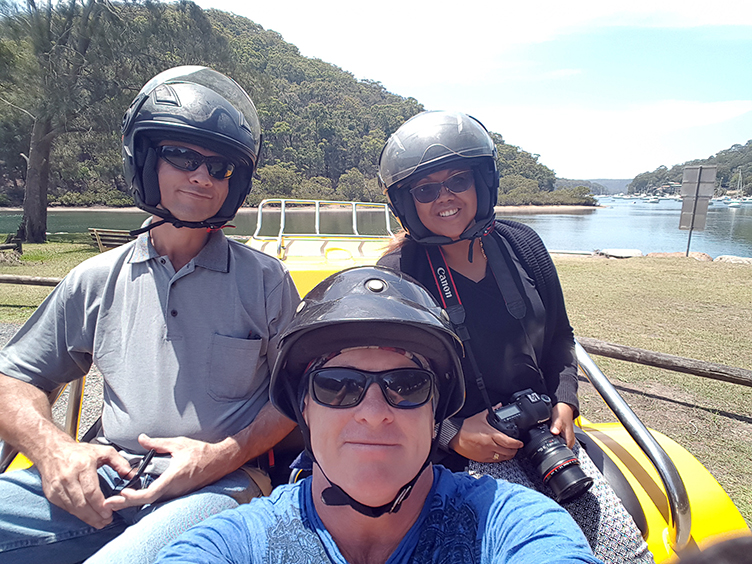 When our passengers rang to organise a ride we had a good discussion of where they wanted to go. Somewhere out of the the city, somewhere nice and somewhere they wouldn’t see on their own. So we worked out a trike tour Northern beaches and more. They loved it.

Craig picked up Camilo & Sam from their hotel. They rode across the Sydney the Harbour Bridge to Jeffrey Street Wharf at Kirribilli. It has beautiful views across the harbour to the Sydney Opera House. Next they drove through Cremorne, Mosman on the lower north shore of Sydney. Down past Taronga Zoo to Bradleys Head, sometimes you can see the koalas up in the trees at the zoo. The next sight were Georges Head, Balmoral, Clontarf, Dobroyd Headland.

Dobroyd Headland has wonderful views across to Sydney Heads – both North and South Heads. They continued down to Manly then up the Northern beaches, such as Curl Curl and Dee Why until they turned off and rode past Pittwater via Mccarrs Creek near Newport. They rode further to Terry Hills before turning back to head south. They travelled down Powder Works Road so as to follow Wakehurst Parkway past Narrabeen Lake and back to the City.

A great time was had by our passengers and they saw plenty of beautiful scenery on their trike tour Northern beaches. Ring or email us for ideas.

The Sydney Heads (also simply known as the Heads) are a series of headlands that form the 2 km (1.2 mi) wide entrance to Sydney Harbour.