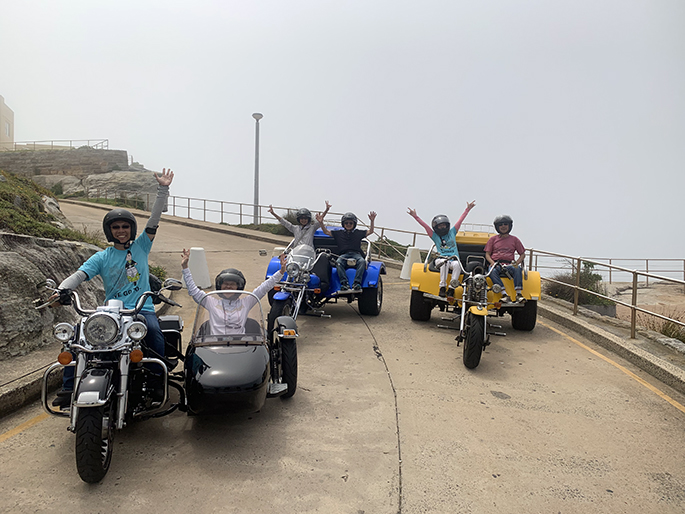 Our passengers are on a cruise ship which docked in Sydney for 3 days. Some of them hadn’t been to Sydney before so they wanted to see the sights, especially the Eastern Suburbs such as Bondi Beach and Watsons Bay. The funnest way to explore Sydney is on a trike and sidecar tour.

Craig and Steve our trike riders and Len our sidecar rider picked them up from the White Bay Cruise Terminal. This is where their ship is docked. They drove over the fabulous ANZAC Bridge and then rode up Oxford Street, this is where the Mardi Gras Parade goes up. Next to Centennial Park and onto Bronte, where a blanketing sea fog rolled in just in time to obscure any veiw of the ocean. They continued north along the coastline to lovely Tamarama, and the famous Bondi Beach. Then to The Gap with it’s beautiful view to the ocean and Watson’s Bay. After a look around there they continued through Rose Bay and Double Bay before returning to their cruise ship at White Bay Cruise terminal.

They had such a fun time and saw a lot in 2 hours on the trike and sidecar tour. Even the fog added to the experience.