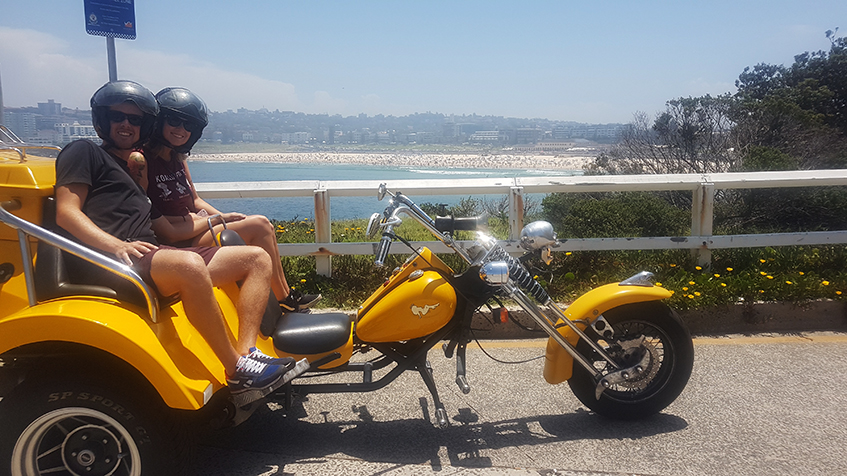 The passengers are in Sydney for a holiday and were given Gift Vouchers for Christmas. They chose to do an Eastern suburbs trike tour. Craig met them at outside The Bucket List, Bondi Beach. They rode to North Bondi and then down to Coogee via Tamarama Beach, Bronte Beach, and Clovelly Beach. They then returned to Bondi Beach to be dropped off.

The Eastern suburbs trike tour was a great Christmas present and a good way for visitors to Sydney to see lots in a short time.

Bronte Beach is a small but popular recreational beach in the eastern suburbs of Sydney. It is 2 kilometres south of Bondi Beach and north of the much larger Coogee Beach.

Tamarama is 6 kilometres east of the Sydney CBD and 1 kilometre south of Bondu Beach. It is affectionately nicknamed Glamarama (or Glamourama) by the locals, as it is a beach where wannabe trend setters come to sunbathe and swim or simply try to be seen. The suburb is mostly residential and the beach and adjacent parklands have been popular places for recreation such as swimming, surfing, sunbaking and picnics for more than a century.

Coogee is 8 kilometres south-east of the CBD, and is also a part of the Eastern Suburbs region. The Tasman Sea and Coogee Bay along with Coogee Beach lie towards the eastern side of the suburb. The beach is popular among families and famous for its safe swimming conditions.