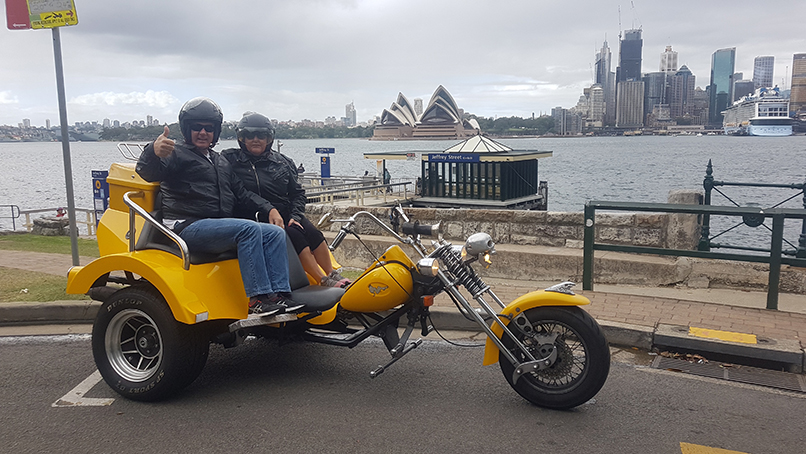 Visitors to Sydney, our passengers organised a trike ride over 3 bridges with us. It is a great ride to see part of the lower north shore and the inner west which most visitors don’t get to see. Craig picked them up from their hotel in Darling Harbour and rode them over the Sydney Harbour Bridge. It is one of the most iconic bridges in the world. It is great to see the arches up above your head.

Then for a stop at Jeffrey Street Wharf for photos across stunning Sydney Harbour to the Opera House. They continued on to the lower north shore and along the interesting roads to the inner west. This meant they rode onto the second bridge, the Gladesville Bridge. It spans the Parramatta River and when it was completed in 1964, Gladesville Bridge was the longest single span concrete arch ever constructed.

They continued along Victoria Road until they turned off to follow part of the Bay Run. This is a scenic area which follows the water around Iron Cove Bay. Then finally the fabulous ANZAC Bridge. It is one of our favourites and also great to see without a roof over your head.

Craig then dropped them back at their hotel so they could continue exploring Sydney on foot. A trike ride over 3 bridges is definitely a ride that will give you an idea of what the rest of Sydney could be like.