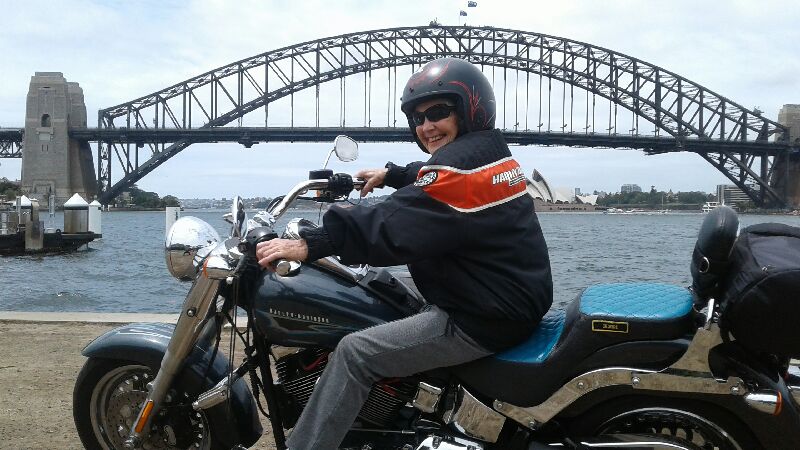 Heather’s best friend bought her a Harley birthday ride 3 Bridges. Heather has always loved motorcycles so it was the perfect gift. Heather’s friend even flew up from Melbourne to see Heather going on her dream Harley ride.

Jungle picked her up from a location in Sydney and rode her around the 3 Bridges. The first bridge was the Sydney Harbour Bridge, we never get tired of riding over such an amazing ‘sculpture’. They stopped at Blues Point for a look across Sydney Harbour to the city and the Harbour Bridge.

They continued on along through some of the lovely north shore suburbs. The next bridge was the Gladesville Bridge in the inner west of Sydney. When opened on 2 October 1964 it was, at 1000 feet (305 metres) the longest span concrete bridge in the world. It remained so until superseded in 1980 by the 416 metre span Krk Bridge in Croatia.

They travelled along a main arterial road (Victoria Road) for a short while before turning off on to Henley Marine Drive. It follows some of the ‘Bay Run’ through the inner west. A lovely pretty area that only the locals know about.

Next bridge they rode over was the amazing ANZAC Bridge. It is wonderful to see without a car roof blocking the view. Jungle then dropped her back in the city so she could eat some lunch with her friend. Heather had such a great experience, the smile never left her face. The Harley birthday ride 3 Bridges was the perfect choice for a present.