Kim was given a gift voucher for a Harley tour so she came down from the central coast to redeem it. Jungle picked her up from Circular Quay and asked her where she wanted to travel. She hadn’t realised there was such a choice. Kim chose the Harley tour 3 bridges Sydney so Jungle drove her over the Sydney Harbour Bridge where they stopped at Blues Point, North Sydney for photos. They rode down River Road to Fig Tree Bridge, then under the bridge to Parramatta River. Jungle was breath tested by the boys in blue but of course, passed the test. All our riders have 0% alcohol while they are riding for us.

They continued their ride by going around Henley Marine Drive and stopped for photos at the Rodd Point Family Tomb. They then rode over the Iron Cove bridge and the spectacular ANZAC Bridge to the Opera House before Jungle dropped Kim back at Circular Quay station. They did a 53km ride and though the weather was a little chilly it was fine and they both had a great time. 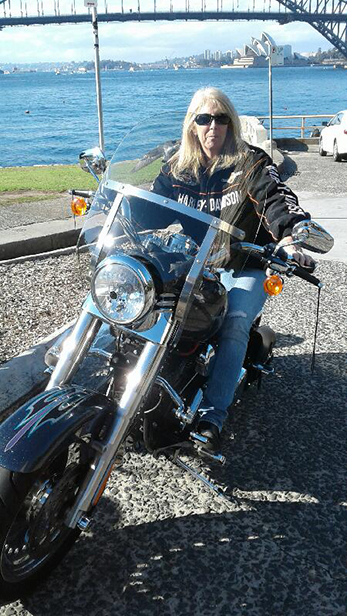