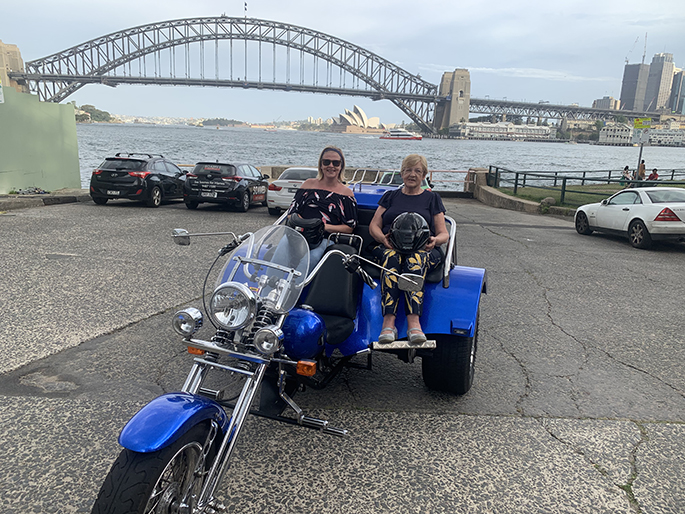 Jo wrote to us on TripAdvisor about the New Year Cruising around Sydney tour:
“I bought this as a gift for my Mum, who is visiting from UK, for her Christmas present. She has talked about doing this on her previous 8 visits, but “never got around to it” so I thought it was the perfect surprise. Steve took us on the 3 Bridges tour, taking in the sights of Sydney. From the start he snapped pics, laughed and joked and made our trip so much fun. Mum had an awesome time. I highly recommend Troll Tours, a huge thumbs up from us both!”

A New Year Cruising around Sydney tour was definitely an experience our passengers wanted to do. They met Steve at Circular Quay and he rode them around on the tour. The first bridge was the iconic Sydney Harbour Bridge. In our 12 years of doing tours, we never tire of seeing the arch from below. It is a great view from the trikes and Harleys as there is no roof to stop the view. First stop was Blues Point with the gorgeous view across Sydney Harbour towards the Sydney Opera House and the Harbour Bridge.

Each of the bridges has an interesting history and each is constructed very differently so the trike tour of 3 bridges is a good ride to do. Also, each bridge has beautiful views from it. New Year Cruising around Sydney – well, actually any time of the year is a really fun experience. 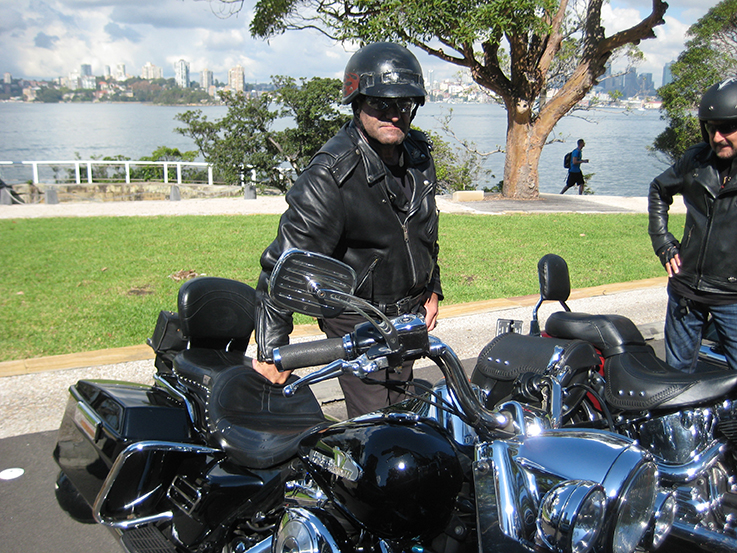 Hi Katrina,
Sorry for the late reply. I had the best time on the City Harley ride 😊. Perry was lovely and your customer service was excellent.
Thank you so much.
Happy New Year!
Nada

On the City Harley ride Sydney Nada got to see all the main places in the CBD and inner suburbs of Sydney. Perry picked her up in the inner west of Sydney and rode her to the Royal Botanical Gardens and Mrs Macquarie’s Chair. They also went through Woolloomooloo, past the Finger Wharf and the infamous Kings Cross and out to Bondi Beach.

Woolloomooloo (/ˈwʊlʊmʊluː/WUUL-uu-muu-loo) is a harbourside, inner-city eastern suburb of Sydney. Woolloomooloo is 1.5 kilometres east of the Sydney CBD. It is in a low-lying, former docklands area at the head of Woolloomooloo Bay, on Sydney Harbour.

Woolloomooloo was originally a working class district of Sydney and has only recently changed with gentrification of the inner city areas of Sydney. The redevelopment of the waterfront, particularly the construction of the housing development on the Finger Wharf, has caused major change.

The Finger Wharf is a heritage-listed former wharf and passenger terminal and now a marina with residential apartments, hotel and a restaurant. The Woolloomooloo Finger Wharf appeared during an era of large finger wharf building. It was built on the site of Sydney’s first fish market (1872-1910) for the Sydney Harbour Trust, which was created in 1900 to bring order to the chaotic state of the wharves throughout the harbour and began a substantial rebuilding program. The jetty was commenced in 1910 and it was largely completed by 1913.

On the City Harley Ride Sydney we drive past Finger Wharf but we don’t stop. It is definitely worth a look through if you are walking past. 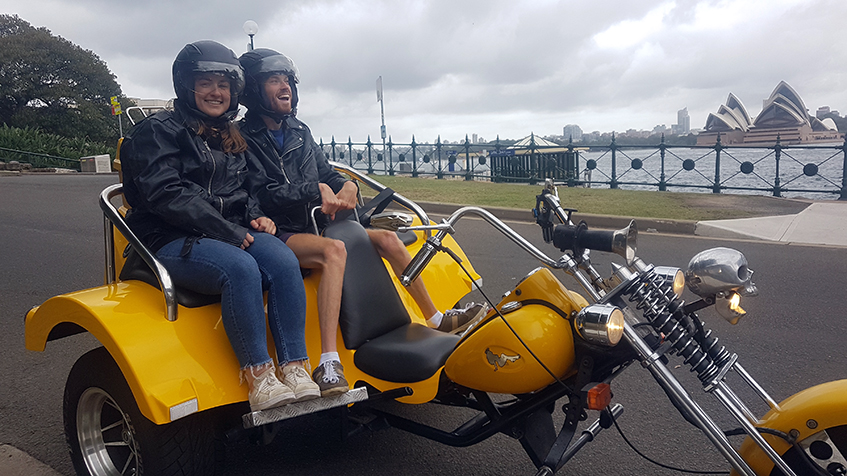 Nick and Tessa did a trike ride Eastern Sydney. This is what they wrote on TripAdvisor,
“We had a fabulous morning riding around Sydney and couldn’t stop laughing and smiling the whole ride! Craig was a fantastic driver who made us feel safe and comfortable throughout the tour! We were able to stop at many destination and saw amazing views. Would definitely recommend this tour to anyone whether a tourist or a Sydney local was a fun morning and an Amazing way to see some of Sydney! Katrina was very helpful throughout the booking process and made it all very easy and stress free!”

Nick really wanted to do the trike ride Eastern Sydney again. He did it last year and had to save up again. Nick has cerebral palsy and the trike is perfect for him. He can sit in the middle with a seatbelt on and the back of the drivers seat keeps him in. His carer Tessa went with him and they had a ball. As you can see by the photo, there are grins from ear to ear.

Craig picked them up from near Jeffrey Street Wharf, drove them over the Sydney Harbour Bridge, around the Royal Botanical Gardens and past Mrs Macquarie’s Chair. Next they drove through Woollomooloo and the infamous Kings Cross. They headed out through the eastern suburbs to Bondi Beach, probably the most famous beach in Australia.

After exploring the area they drove back through the city and over the bridge to Kirribilli to their van. A trike ride Eastern Sydney is a wonderful way to see famous parts of Sydney. You will see all the famous sights such as the Sydney Harbour Bridge, the Sydney Opera House, Bondi Beach, The Royal Botanical Gardens, Mrs Macquarie’s Chair and much more. 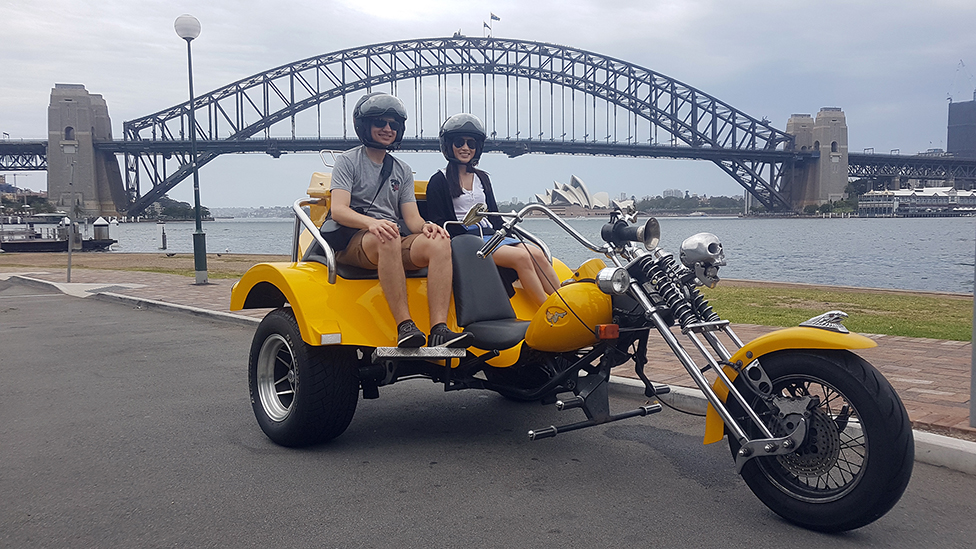 Thank you for sending these through, they’re lovely. Yes, our ride with Craig went well! We both loved it and enjoyed our time. Anthony was very surprised with the gift!

We enjoyed our ride with Craig very much! Craig was very friendly, knowledgeable with his history and overall lovely to chat with. It was definitely an experience to remember. We can’t wait to do it again!”

Visiting Sydney, Sandy thought it would be a great idea to organise a surprise trike tour gift. Anthony got a huge surprise and loved every second of it.

Craig picked them up at Circular Quay and rode to Blues Point. It has wonderful views across the Harbour to the Sydney Opera House ans the Harbour Bridge. They then went to Jeffreys Wharf, it has beautiful views across Sydney Harbour from a different perspective. Then they drove back over the bridge to Kings Cross and through the Royal Botanical Gardens to Mrs Macquarie’s Chair. They then returned to drop off at Circular Quay. This is what Sandy wrote later: Hi Katrina,
Thank you for sending the photos through, they’re lovely. Yes, our ride with Craig went well! We both loved it and enjoyed our time. Anthony was very surprised with the gift! We enjoyed our ride with Craig very much! Craig was very friendly, knowledgeable with his history and overall lovely to chat with. It was definitely an experience to remember. We can’t wait to do it again! http://trolltours.com.au/product/harbour-bridge-ride/https://en.wikipedia.org/wiki/Jeffrey_StreetAnthony + Sandy 10.12.18 – surprise trike tour gift 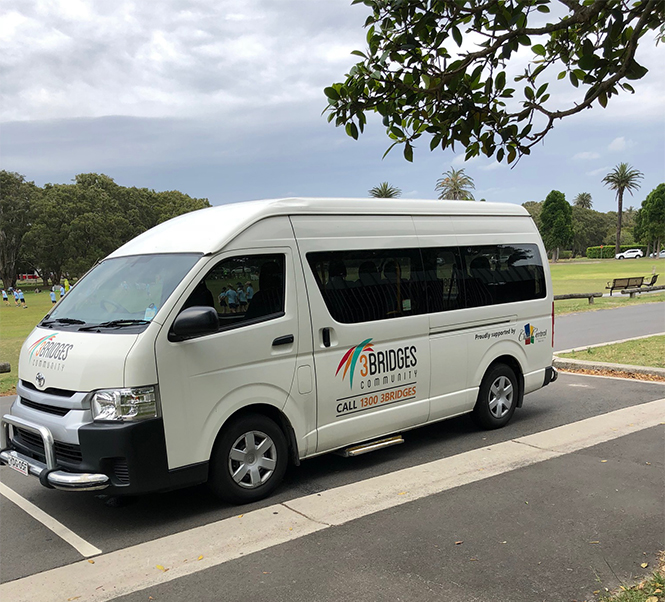 Hi Katrina,
Just wanted to let you know that the group had the most awesome time on Monday.
Brian was so patient and helpful to everyone, and I think we may have made him a bit late for his next booking 🙁
We look forward to doing this again in the future.
Cheers,
Michelle

If you have a group of children or adults with disabilities a trike ride is a great way to give them a safe and fun experience. The trikes all have seatbelts. 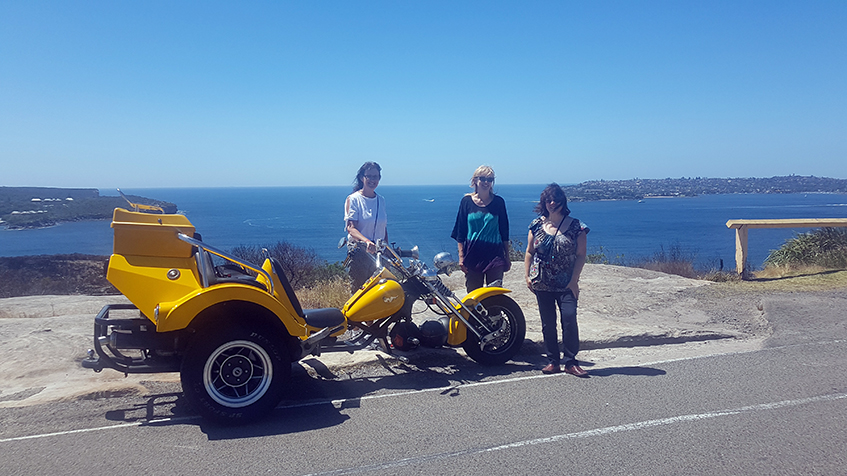 trike tour Manly Sydney
Hi Katrina,
We had an AWESOME time! Craig was the best. We enjoyed every minute and will gladly share the pics (I asked the girls) and a glowing review once we get home.
Thanks so much,
Sharon, Marilyn and Trisha

A trike tour Manly Sydney was what our 3 Canadian passengers wanted to do. Craig our trike rider, picked them up from Novotel Hotel Manly and toured the Northern beaches. They then returned to Manly via Narrabeen Lake and Dobroyd Headland. Our passengers saw some of the loveliest views in Sydney on this tour and some of Sydney’s best beaches. Craig was enjoying himself so much that he gave them extra time. It was such a beautiful day for a ride, Sydney certainly showed itself off!

http://trolltours.com.au/product/design-your-own-ride/
http://www.sydney-australia.biz/beaches/northern-beaches.php
The Northern Beaches is an area in the northern coastal suburbs of Sydney, in the state of New South Wales, Australia, near the Pacific coast. This area extends south to the entrance of Port Jackson (Sydney Harbour), west to Middle Harbour and north to the entrance of Broken Bay.
http://trolltours.com.au/wp-content/uploads/2018/12/Harley-Manly-trike-tour-Sydney-MaShTr2.jpg 476 847 Kat http://trolltours.com.au/wp-content/uploads/2016/08/logo.png Kat2018-12-05 23:18:492018-12-05 23:19:11Marilyn, Sharon + Trisha 03.12.18 – trike tour Manly Sydney 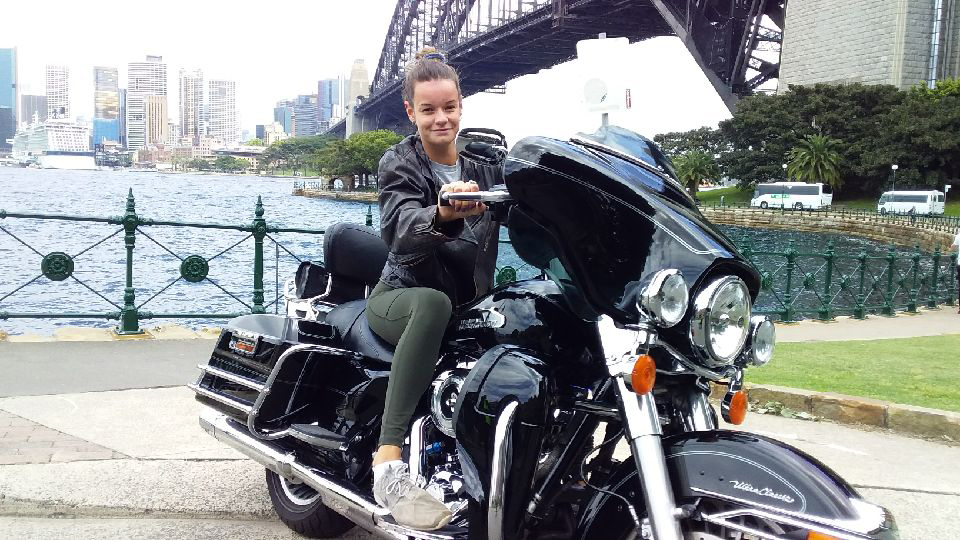 A Harley ride Christmas Voucher present
Hey Katrina,
The tour was amazing and Perry was great! Of course I’ll write a review that’s no problem at all. And yes you can use the photo.
Thanks for contacting me,
Holly

A Harley ride Christmas Voucher present was such a great idea. Holly’s parents didn’t know what to buy her for Christmas last year so they bought her the Harley ride. Buying the voucher meant she could pick a date that suited her. Perry picked her up in the Eastern suburbs, drove her around the city, over the Harbour Bridge to the north side where they did the Kirribilli Loop. This involves stopping near Jeffrey Street Wharf for photos and a view across the harbour to the Opera Hause and Sydney city. It also has a view of the Harbour Bridge from the side and you’ll also drive underneath it.

They rode back over the Harbour Bridge, around the Botanical Gardens, past Mrs Macquarie’s Chair and back to the drop off in Bondi. Holly and Perry both had fun on the ride, the riders love showing off Sydney from the back of their Harleys.

If filling out the Gift Voucher form online is too difficult, just email or ring us with what you would like. We will get in touch to arrange it with you. 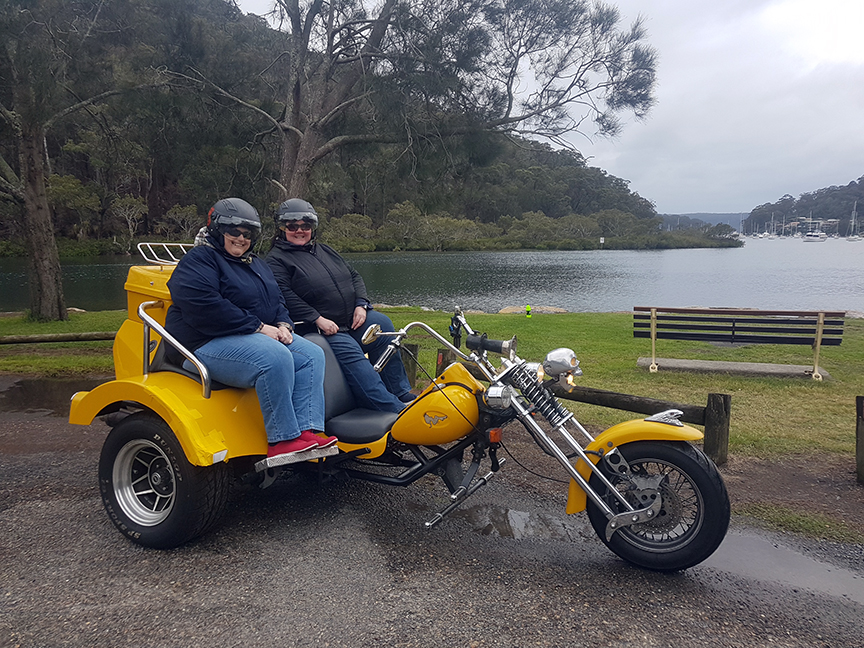 The ride with Craig was great. We had a fantastic time. Happy for you to use photos.

Kim + Kylie have both wanted to do a trike tour for quite a number of years – this is the year! They organised the Beach Beauty birthday trike tour with us. They live in the inner west of Sydney but decided to drive to the north side so they could see more of the northern beaches. We researched the areas and found a good place in Chatswood where there is no time limit of parking fees. Craig our trike rider, picked them up from there and took them on the 3 hour Beach Beauty tour. They wanted to spend more time around the Palm Beach area because they don’t visit there much. Craig knows the area well so showed them the well-known and famous sights (Home and Away territory) and the lesser known but equally as impressive scenery.

Our passengers had a wonderful time, saw heaps and loved the experience of being on the trike. There really is no feeling like it, it is so much fun.