A Father’s Day present Sydney is so hard to buy! Does he really want more socks or chocolates? We think he’d prefer a Harley or trike ride with Troll Tours? We love chocolate but have tried every sort there is and it is still forgettable, so how about getting your dad a present he will remember forever! The Harley and trike rides really are a fun, memorable experience. We promise he’ll love you more for it.  🙂.  Father’s Day present Sydney – done and dusted!

As a Father’s Day Special we are giving 10% off all rides 1 hour or longer.  This great deal is available for a limited time only – until Saturday 02 Sept 2018.

If you can’t organise the ride now we can send you a Gift Voucher so he can organise a date later on. They are valid for 12 months.

As seen in Flightnetwork’s Australia’s Best Tours of 2018.
Obviously if you are looking at a Harley or trike tour from us you like adventure! You’ll probably have an adrenaline rush after doing one of our fantastic experiences and are looking for something else to do, so have a look at this site. It has experiences all over Australia. https://www.flightnetwork.com.au/blog/adventures-abound-australia-for-those-who-seek-the-extraordinary/ 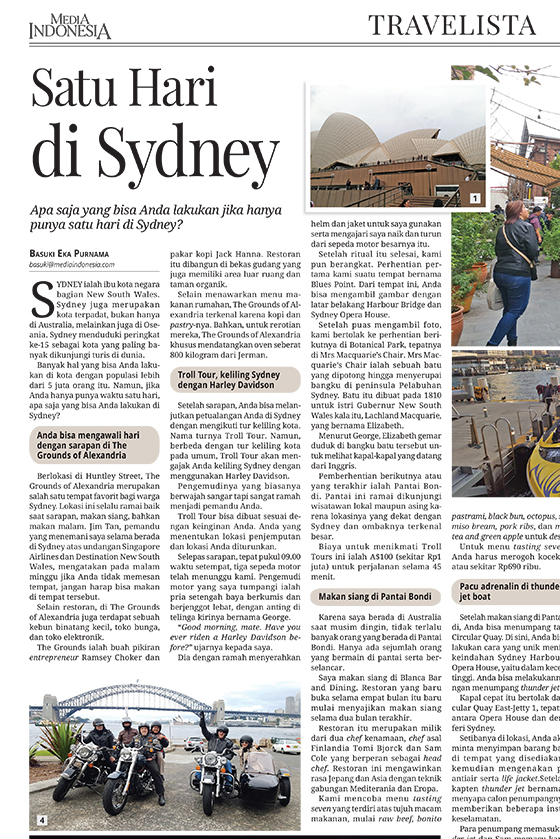 ‘One Day in Sydney’ is an article written by one of a few visiting journalists from Indonesia. They visited the usual touristy areas as they should, Sydney is beautiful and has many iconic buildings and landmarks to see. They also went on a Troll Tours Harley tour over the Sydney Harbour Bridge to have a look across the Harbour to the city, the Sydney Opera House and The Bridge from a different angle.

They were driven back over The Bridge, past Mrs Macquarie’s Chair which is located in the Royal Botanical Gardens. This place also has a different view of The Opera House and The Bridge, facing west. They travelled on further through the ‘posh’ Eastern Suburbs and out to Bondi. They had a good look around before being driven through the city and  to their drop off point.

All the journalists had a fun experience on the Harleys and in the sidecar, so we made the list of best things to do in Sydney. This article was published in “Media Indonesia”. It shows that if you have just ‘One Day in Sydney’ or limited time (or plenty of time) take a Troll Tours tour and you are guaranteed to see many of the Sydney sights and have fun doing so.