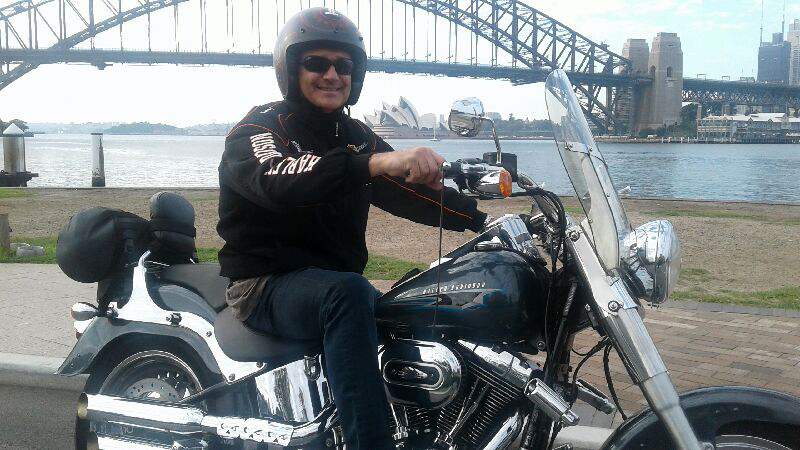 A Harley ride around 3 Bridges is an interesting ride. It is a good one to fill in some time. Nigel was in Sydney for a night because it was his daughter’s graduation as a paramedic. He had a few hours before he had to check out of his hotel. He thought he should do something so he booked a Harley ride. Jungle picked him up early from his hotel.

A Harley ride around 3 Bridges

is Jungles favourite ride and Nigel was happy to do it. To see something a bit different from the norm. Firstly they rode over the Sydney Harbour Bridge. Then they stopped at Blues Point for photos and to admire the view. It is such a wonderful view.

Continuing on, they rode into the lower north shore suburbs of North Sydney and Crows Nest. Along River Road and into the inner west. The next bridge is the Gladesville Bridge. It has beautiful views looking eastward over the Parramatta River and into Sydney Harbour. There is a lovely view of the Sydney Harbour Bridge.

They joined up with the main arterial road – Victoria Road. Being early Saturday morning, the first day of the school holidays there was no traffic. Yahoo! They rode around Iron Cove Bay and stopped at Rodd Point. It is a lovely little area with water on 3 sides.

Jungle asked Nigel if he followed the NRL. Yes he does, so Jungle pointed out the lights of Leichhardt Oval. Nigel loves small grounds but had never been to Leichhardt Oval so Jungle took him up to have a look. Jungle then showed him around Callan Park which used to be an asylum for the insane. Nigel was really pleased because his daughter did her training with the Callan Park Ambulance. So now he knows where it is and what it looks like.

The main bridge number 3 is the spectacular ANZAC Bridge. We never tire of looking up at the arches. The hour was up so Jungle dropped Nigel back at his hotel. A great time was had by both the passenger and the rider. A Harley ride around 3 Bridges is a special tour and you will see many places you didn’t even know existed!